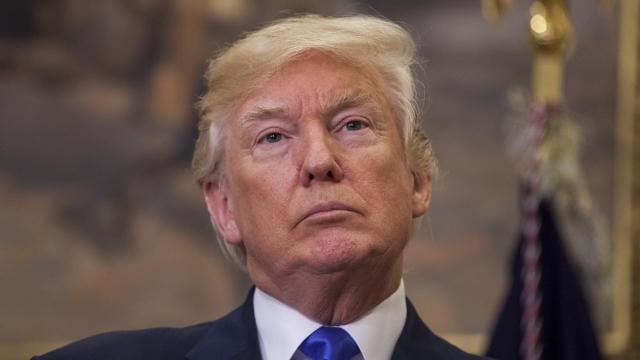 SMS
Fake Video Of Trump Shooting Media Members Shown At Political Event
By Meg Hilling
By Meg Hilling
October 14, 2019
In the video obtained by The New York Times, President Trump's head is superimposed on the body of a shooter taking aim at the media.
SHOW TRANSCRIPT

A video depicting a fake President Trump shooting and stabbing members of the media was reportedly shown at a conference at his Miami resort last week. The video was obtained by the New York Times.

The conference was held by American Priority, a pro-Trump group. The New York Times reported that the video contained the logo for President Trump's 2020 reelection campaign.

According to the outlet, the video appears to be an edited scene of a church massacre from the film, "Kingsman: The Secret Service." In the video, President Trump's head is superimposed on the body of the shooter who takes aim at the churchgoers inside what is labeled as the "Church of Fake News." Churchgoers heads have been replaced with the faces of President Trump's critics and media logos.

The video includes images of Sens. Bernie Sanders and Mitt Romney, former President Barack Obama, the late Sen. John McCain and actress Rosie O’Donnell, to name a few — all of whom are reportedly stabbed, struck, shot or set on fire by the president in the fake video.

On Twitter Monday, White House Press Secretary Stephanie Grisham said the president had not yet seen the video but planned to watch it shortly. She said "based upon everything he has heard, he strongly condemns this video."

Media outlets condemned the video for the "horrific" display of violence and called on President Trump to publicly denounce it.

The president of the White House Correspondents’ Association said in a statement, "All Americans should condemn this depiction of violence directed toward journalists and the President's political opponents." He added, "We have previously told the President his rhetoric could incite violence. Now we call on him and everybody associated with this conference to denounce this video and affirm that violence has no place in our society."

American Priority organizers said the video was "not approved, seen or sanctioned by the #AMPFest19 organizers" and they were not aware of the video until they were contacted by the New York Times.

Donald Trump Jr. and former White House Press Secretary Sarah Sanders spoke at the conference. Both told the New York Times they did not see the video.