'Faithless Electors' Aren't Anything New, But Now They Have More Sway 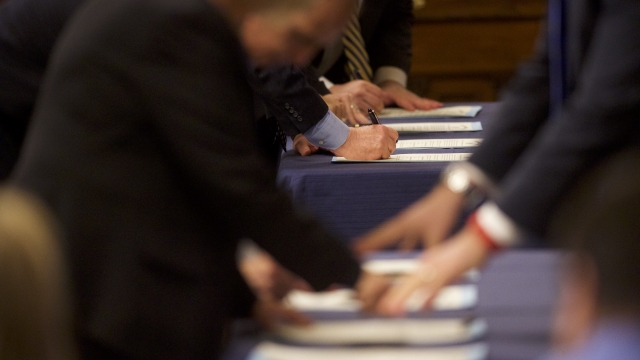 SMS
'Faithless Electors' Aren't Anything New, But Now They Have More Sway
By LeeAnne Lowry
By LeeAnne Lowry
August 23, 2019
According to Fair Vote, there have been 167 faithless electors since the electoral college was founded.
SHOW TRANSCRIPT

A U.S. appeals court decided on Tuesday that Electoral College members in some states can choose which presidential candidate they vote for, rather than follow their state's popular vote. And that's a big statement: It means a single elector could sway the outcome of an election.

Here's a basic idea of how the Electoral College works: When Americans vote in a presidential election, they aren't really voting for the presidential candidate. They're voting for electors who have vowed to represent that candidate's party.

But in 2016, there was an unusual number of so-called "faithless" electors, or people who didn't vote for the candidate their party chose. In that election, seven electors — five Democrats and two Republicans — defied the popular vote.

It isn't a new concept. According to Fair Vote, there have been 167 faithless electors since the electoral college was founded.

Here's a breakdown of those electors: 43% changed their vote because the candidate they were supposed to vote for died before the electoral college could vote. 17% either didn't vote or cast an "abnormal" vote, which Fair Vote says, for example, could mean they switched the presidential and vice presidential candidates. That leaves a remaining 40% who chose to vote for the candidate they wanted rather than matching the popular vote.

That's still dozens of times electoral voters have deviated from popular vote. Until recently, it hasn't caught much attention because it's never affected the outcome of an election, and even if it might, a state could throw out the ballot.

That's what Colorado did in 2016 when an elector voted for John Kasich instead of Hillary Clinton. Colorado law required him to vote for Clinton because she won the state's popular vote, so his ballot was thrown out and he was replaced. But the elector sued the state, and an appeals court ruled electors in the 10th circuit's six states don't have to follow the popular vote.

Colorado's Secretary of State called it a "dangerous precedent," and it's added more skepticism about the electoral college. Over the past decade, 16 states have joined the National Popular Vote Interstate Compact. That agreement aims to change the way states award their electoral votes to ensure that the presidential candidate who gets the most votes nationwide ends up in the White House.

The pact only goes into effect if the participating states total 270 electoral votes or more. The states would then link their electoral college votes to the winner of the national popular vote. It's currently 74 electoral votes away from its goal, but Tuesday's ruling could set the movement back because it gives Colorado and New Mexico electors freedom to vote for whom they choose.