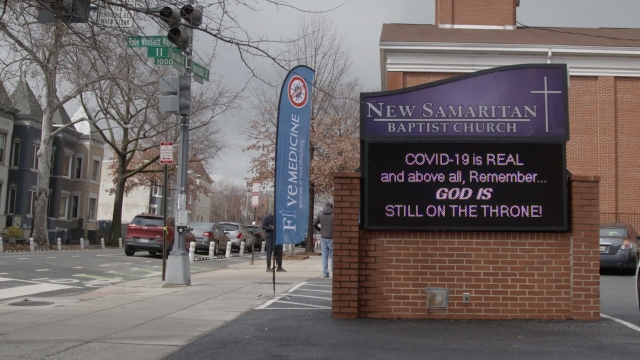 Nation of Islam, some Catholic organizations warn of some vaccines while other churches, Jewish centers serve as vaccination sites.

On a rainy day in Washington, Pastor Michael Kelsey Senior is here at his Northeast DC church, along with more than 200 Washingtonians and a mobile vaccination clinic set up in the church parking lot.

"We’re seeing numbers increase, we are seeing inhibition and hesitation decrease and to G-d be the glory," said Kelsey.

It’s the second of four events being held here. But making the choice to host vaccination clinics didn’t come easily.

"Do you feel a weight as a pastor and a responsibility that you are telling them, in a way, that this vaccine is safe?" asked Newsy reporter Amber Strong.

"I knew that I would be taking on some responsibility. Just as a leader in the community, and that is a burden...I'm also quick to tell them now I can't make your decision for you. I still respect your decision, whatever it is," said Kelsey.

Lack of trust was a big factor in vaccine hesitancy at the start of the rollout, but the numbers have improved, particularly among older Black people.

"About four in 10 Black adults now say they've either gotten vaccinated or want to get vaccinated as soon as possible," said Ashley Kirzinger, associate director of Public Opinion and Survey Research for the Kaiser Family Foundation.

"You are trusted, you are trusted so much more than the outside non-Black and brown world," said Dr. Anthony Fauci during a meeting with faith leaders.

Early on, government officials recognized faith leaders could move the trust needle. They weren’t alone. Drugstore chain Walgreens is joining the COVID-19 church vaccination effort with a faith-based event this month, something they’ve done before with flu shots.

"We partner with churches and faith leaders to come out to where the people are to get them their vaccine," said Dr. Nate Boutte a pharmacist with the Walgreens Specialty Branch.

But there are complications in the faith leader vaccination matchmaker effort.  The state of Florida, for example, has vaccinated more than 46,000 at churches and Jewish centers since January.

"I thought, 'I’ve been praying and asking God for a cure.' This is his way to answer,” said Malinda James of Tallahassee.

But as Scripps News reported previously reported, that program has been riddled with accusations of favoritism based on connections, not data.

"It would be disingenuous to say politics and who’s who is not a part of it," said Pastor Clarence Williams of Greater Mount Zion African Methodist Episcopal Church.

And as much as faith leaders can boost vaccine acceptance, they can also take it away. The Nation of Islam’s mistrust of the government has lead them to reject the vaccine. The Archdiocese of New Orleans objects to vaccines developed with abortion-derived cell lines.Those two alone have an audience of more than ½ a million people. Some evangelical Christians and Orthodox Jews are also anti-vaccination.

There’s another obstacle, Black Millennials and Gen Z are less connected to Black churches than Baby Boomers. And according to the Kaiser Family Foundation Poll, they also lead their elders in vaccine rejection with 20% of those ages 18-49 saying they definitely won’t get the vaccine compared to only about 2% of Black seniors over the age of 65. So while faith leaders have been instrumental in driving trust among some groups, it may take alternate messengers to reach others.

According to that Kaiser survey, sometimes the best messengers are friends, family members who’ve had the vaccine. So the more people are vaccinated, the more the people around them want to be vaccinated.