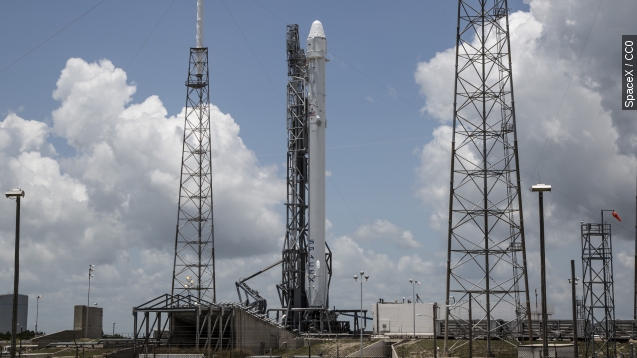 SMS
Failed Rocket Launches Cloud The Future Of Space Travel
By Evan Thomas
By Evan Thomas
June 28, 2015
SpaceX said it will release more details once it completes a thorough investigation of Sunday's failed launch of the CRS-7 rocket.
SHOW TRANSCRIPT

While it has lost rockets in testing and lost first stages as it developed reusable launchers, this is the first time supplies for the International Space Station have been on the line. (Video via KWTX, SpaceX)

Several minutes after launch, the Falcon 9 rocket experienced what SpaceX called "an anomaly on ascent." But SpaceX COO Gwynne Shotwell says initially the flight went as planned. (Video via SpaceX)

"First stage flight remained nominal. We do not expect this to have been a first stage issue. We saw some pressurization indications in the second stage, which we’ll be tracking down and following up on there," Shotwell said. (Video via NASA)

SpaceX now joins an unfortunate club: The last launch of Russia's unmanned Progress spacecraft ended with it losing control and burning up before it could deliver its supplies to the ISS, and Orbital Sciences' Cygnus capsule made it less than a minute into its launch last year before it blew up. (Video via NASA)

The SpaceX rocket was carrying provisions for the ISS crew, a new docking adapter intended for use with future commercial missions and a new spacesuit. While the loss is a setback, NASA's William Gerstenmaier says it's a recoverable one and says critical supplies for short-term operations are still at acceptable levels. (Video via NASA)

"We're in good shape from a food standpoint, from a water standpoint. We need to watch the multifiltration bed that purifies water. There was a replacement bed on this flight, and we’ll have to watch water levels," said Gerstenmaier. (Video via NASA)

Space News reports food supplies aboard the ISS will enter reserve level July 24 and won't be fully depleted until September.

Still, the string of high-profile failures is leading to some murkiness for the immediate future of space travel.

A BBC science analyst notes, "Depending how long it takes engineers to isolate and rectify the cause of the problem, SpaceX's timeline to that first crew launch could also now be set back by many months."

Gerstenmaier says it's too early to speculate on what this might mean for crew programs but also hints at how this failure could still be useful.

"This learning can actually kind of expedite things. We can actually learn from this failure; understand a weakness or a flaw in a design that we might not have seen for a while," Gerstenmaier said. (Video via NASA)

NASA lists Progress flight 60 as the next launch to the ISS, still on schedule for July 3.