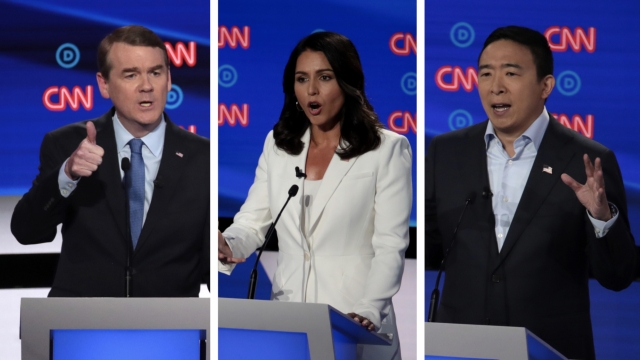 Ten Democratic presidential candidates debated a variety of policy issues on night two of the CNN debate in Detroit. They lobbed attacks at Amazon, the education system and each other, and we're going to see if their talking points hold up to the facts.

"She put over 1,500 people in jail for marijuana violations and laughed about it when she was asked if she ever smoked marijuana," Gabbard said.

Rep. Tulsi Gabbard was talking about Sen. Kamala Harris and her time as the attorney general of California. The 1,500 number matches a report from the Washington Free Beacon. The outlet used state data to calculate the number of people sent to state prisons for marijuana offenses from 2011-2016. But it's unfair to put all those prosecutions on Harris; as the AG, she wouldn't have been directly involved in lower-level drug cases.

As for the laughter, Harris did chuckle after the hosts of "The Breakfast Club" asked if she'd ever smoked weed.

"Have you ever smoked?"

"I have, and I inhaled. I did inhale," Harris answered.

Let's move on to an economic statement Andrew Yang made in his opening remarks.

"Amazon is closing 30% of America's stores and malls and paying zero in taxes while doing it," Yang said.

There's no doubt that Amazon is having an impact on brick-and-mortar sales in the U.S., but Yang's statement might have gone a touch too far. A Credit Suisse report from 2017 estimated that 20-25% of American malls would close within five years. That's close to the number Yang cited, but there's not necessarily a direct link between Amazon and those closures.

As for taxes, Yang's comment was a bit too broad. Thanks to rebates and loopholes, Amazon paid zero federal income taxes last year, but the company does pay other taxes like property taxes and payroll taxes.

Now let's look at a statement from Sen. Michael Bennet on education and the country's prison population.

"Eighty-eight percent of the people in our prisons dropped out of high school," Bennet said.

Bennet's staff pointed our partners at Politifact to a 2014 story in the Huffington Post. It says, "over 80 percent of the incarcerated population is high school dropouts," but the author doesn't cite his source. There are a few surveys and reports that estimate the education level of prisoners in the U.S., but the results are varied. A 2003 report said 75% of state inmates and 59% of federal inmates didn't finish high school, but that many of those people did complete their GED. Another report from 2014 said 30% of adults in U.S. prisons had less than a high school education. Data does show that the education level of the U.S. prison population is less than that of the general population, but it seems Bennet's statement during the debate overestimated the exact number.