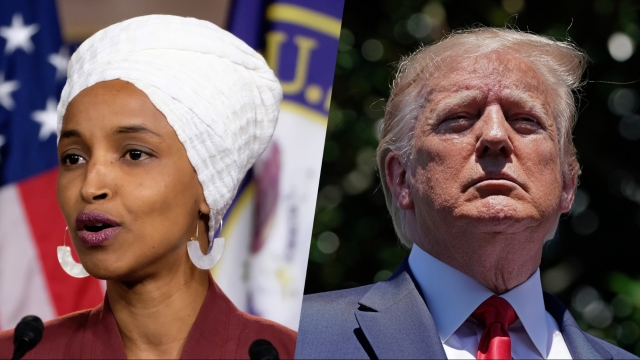 President Donald Trump insists his tweets about four Democratic congresswomen were not racist. In defending his comments, he called out one lawmaker by name: Rep. Ilhan Omar. But the president misrepresented her words. We'll look at his comments one at a time.

"I mean, I look at the one — I look at Omar. I don't know, I never met her. I hear the way she talks about Al-Qaeda. Al-Qaeda has killed many Americans. She said, 'You can hold your chest out, you can — when I think of America, uh. When I think of Al-Qaeda, I can hold my chest out,'" the president said.

That description most closely aligns with something Omar said in 2013, before she was in Congress. During an interview on a local PBS show in Minnesota, she reflected on a college course she took on terrorist ideology and how the Arabic language is portrayed.

Contrary to President Trump's description, Omar did not say she held her own chest out when thinking about Al-Qaeda. Rather, she was talking about the tone and body language that's often used when Arabic words and names are spoken in other languages.

"When she talked about the World Trade Center being knocked down: 'Some people.' You remember the famous 'some people.' These are people that, in my opinion, hate our country," President Trump said.

This criticism stems from a speech Omar made in March at an event for the Council on American-Islamic Relations in California.

"CAIR was founded after 9/11 because they recognized that some people did something and that all of us were starting to lose access to our civil liberties," Omar said.

This comment was criticized at the time; some said it sounded like Omar was trivializing the Sept. 11 attacks. Omar's supporters defended her and pointed to other parts of her speech that focused on love and inclusion.

It's worth noting that Omar was wrong about the founding of CAIR — the organization began in 1994.

Omar has not praised Al-Qaeda or said the terrorist organization is "great." Multiple fact-checkers, including our partners at Politifact, called out the president for being plain wrong on his characterization of her.

This story is reported in partnership with PolitiFact and is part of an in-depth analysis show called "What the Fact" that airs Sunday mornings on Newsy. Additional reporting from Newsy affiliate CNN.