Saying The Mueller Report 'Exonerated' Trump May Be Premature 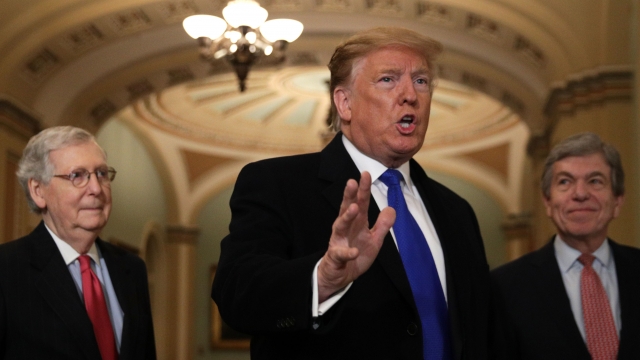 "And they made a decision that there was no obstruction. So that makes it a complete and total exoneration. I don't know any other way to look at it," White House press secretary Sarah Sanders said.

The full Mueller report hasn't been released outside of the Justice Department, so everything we know about what the special counsel did and didn't find is based on Barr's summary.

His letter lists two big takeaways from Mueller's report. One: No one in the Trump campaign or anyone associated with it "conspired or coordinated with Russia" in its 2016 election meddling. Two: The special counsel did not weigh in on the president's possible obstruction of justice.

The second point is arguably the more notable of the two. According to Barr, Mueller's report spells out the case for and against charging the president with obstruction. Barr quotes the report as saying, "while [it] does not conclude that the President committed a crime, it also does not exonerate him."

That word choice is key, and it contradicts statements from the president himself.

"So it's complete exoneration. No collusion. No obstruction," Trump said.

Since the report didn't come to any conclusions on obstruction, it punted that decision to Justice Department officials. Barr said he and Deputy Attorney General Rod Rosenstein decided Mueller didn't find enough evidence to charge the president with obstruction, so it doesn't look like he'll face criminal charges because of Mueller's investigation. But other probes into President Trump, his business and his actions as a politician are ongoing.