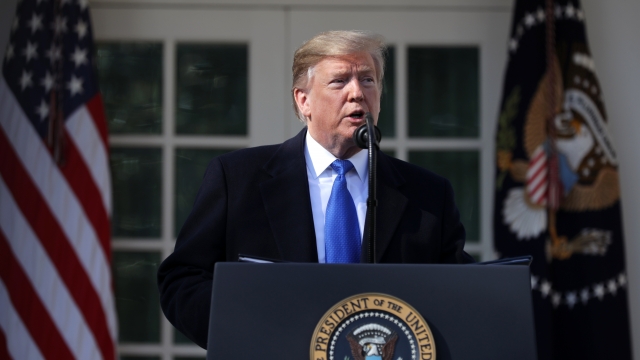 Immigrants can sponsor relatives to move to the U.S., but the process isn't the free-for-all President Trump makes it out to be.

During President Trump's national emergency announcement, he made a few different comments about his frustration with the U.S.' immigration laws.

"You have chain migration, where a bad person comes in, brings 22 or 23 or 35 of his family members — because he has his mother, his grandmother, his sister, his cousin, his uncle — they're all in," Trump said.

The president has complained about so-called "chain migration" before, but his description isn't a fair representation of the law.

Chain migration is a legal immigration process that lets immigrants sponsor certain family members so they can also live in the U.S. It works like this: Person A immigrates to the U.S. legally. When that person becomes a permanent resident, they can sponsor their spouse and any unmarried children to move to the U.S., too. If Person A becomes a U.S. citizen, they can sponsor more family members, including married children, parents and siblings.

The sponsorship rules don't extend to some of the family members President Trump used as examples, like uncles and cousins.

That said, it is possible for our hypothetical Person A's uncle to get a green card through this program, but Person A couldn't be their direct sponsor. To allow an uncle to move to the U.S., Person A would have to become a U.S. citizen and then sponsor his or her parent. That parent would then need to become a citizen before sponsoring their brother, Person A's uncle.

Considering the specific family members an immigrant is allowed to sponsor, it's unlikely that any one person has 20 or more relatives eligible to live in the U.S., as the president claimed.