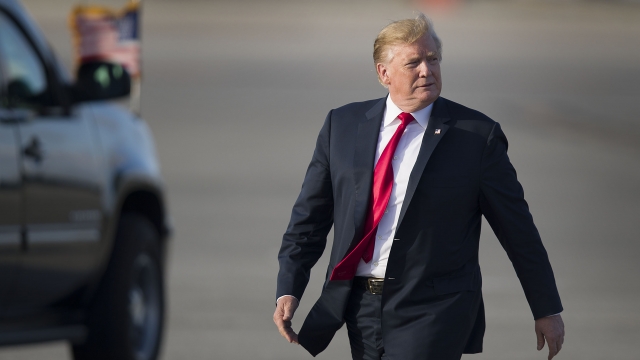 President Trump took a swipe at New York Democrats on Twitter for not voting to expand tuition benefits for Gold Star families.

President Donald Trump frequently talks about his support for the military and their families, and he recently criticized New York lawmakers for not doing enough for them.

That tweet is talking about two separate issues. But on both accounts, President Trump's brief description is correct.

First, we'll look at the blocked bill. New York lawmakers considered a bill that would have expanded an existing tuition assistance program for military families. The Military Enhanced Recognition Incentive and Tribute Scholarship, or MERIT Scholarship, pays tuition and room and board for spouses, children and dependents of service members who are killed or severely and permanently disabled in combat.

The bill's supporters wanted to nix the "in combat" part of the requirements and replace it with "in the line of duty" to make the scholarship available to more families. But Democrats voted to hold the bill in committee, effectively killing it. So President Trump was right to say that Democrats blocked it.

But his brief mention on Twitter does leave out some context. The two votes weren't connected to each other in any way, and the programs involved offer very different types of tuition assistance. The MERIT scholarship fully covers tuition, up to about $24,000 per year. The DREAM Act gives undocumented immigrants the opportunity to apply for state-funded grants and scholarships, but those don't necessarily cover the full cost of tuition.

It's also worth noting that after the bill failed, New York Gov. Andrew Cuomo took executive action to expand the MERIT Scholarship to all military families in the state, not just families of those killed or injured in combat zones.