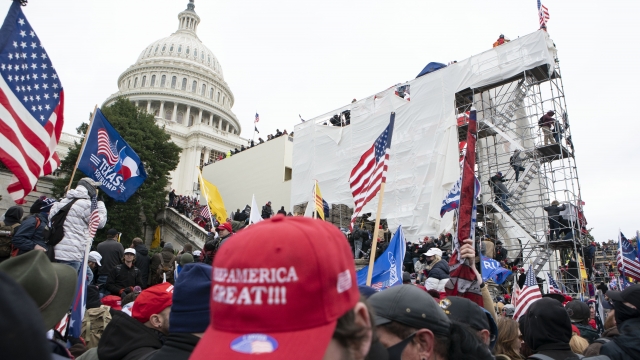 Some GOP lawmakers and allies of President Trump have pushed a baseless claim that antifa spurred the Capitol riot Wednesday.

Some Republican lawmakers have pointed fingers at antifa for the riot that erupted at the nation's Capitol on Wednesday, though no evidence of the group's involvement has emerged.

"The Washington Times has just reported some pretty compelling evidence from a facial recognition company showing that some of the people who breached the Capitol today were not Trump supporters," Republican Rep. Matt Gaetz said Wednesday on the House floor. "They were masquerading as Trump supporters and, in fact, were members of the violent terrorist group antifa."

The facial recognition company cited by the Washington Times, XRVision, told Newsy the story is "false." An attorney for XRVision has instructed the news outlet to "retract the current claims and publish an apology." The Washington Times removed the article from their website and did not provide a clarification.

But it has been shared on Facebook over 90,000 times — and the baseless claim that antifa is responsible for storming the Capitol has been further amplified by congressman Mo Brooks of Alabama and conservative media outlets.

"If antifa was there, we need to try and root this out and make sure that’s called out," former White House press secretary Sean Spicer said Wednesday in an interview with Newsmax.

What is true: Supporters of the president and Qanon, and even current and former state representatives, were in the crowd.

"These are not antifa. They are right-wing extremists," said Elizabeth Neumann, a former Trump Homeland Security official. "For any elected officials who are using their platform to perpetrate more lies, that's what got us to yesterday, and they need to stop."

It seems the president has no doubt Wednesday's crowd was full of his followers, whom he thanked for coming out.

"Go home. We love you. You're very special," President Trump told supporters Wednesday in a video he shared to Twitter.