Fact-check: Are Wages Keeping Up With The Cost Of Living? 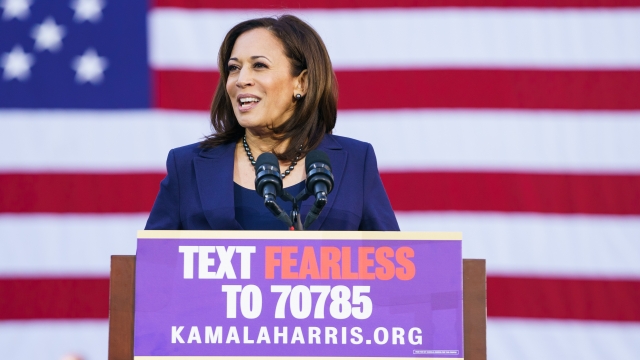 Sen. Kamala Harris is just one of the Democrats vying for the presidency in 2020. In her campaign kickoff speech, she made clear that the economy would be one of her key platform issues:

"Our economy today is not working for working people. The cost of living is going up, but paychecks aren't keeping up," Harris said.

She doesn't throw out any specific numbers or figures. Wage data can tell very different stories depending on the factors you consider, like different education levels, skilled vs. unskilled labor, or geographic areas. But Harris spoke generally about the country as a whole, so we'll take a big-picture look.

Data from the Bureau of Labor Statistics shows the median weekly inflation-adjusted wages for full-time employees has been largely trending up since the 1990s. According to our partners at Politifact, that dataset is one economists often use to measure wage growth. If you focus on recent years, that same data shows year-over-year wages have gone up pretty consistently since 2014.

So wages have been increasing, but Harris' point was that the cost of living was increasing faster.

The Consumer Price Index is often used as an indicator of how the cost of living changes. That index tracks the price of everyday goods and services like food, gasoline and utility costs. The Bureau of Labor Statistics says the country hasn't seen any dramatic price increases since the early 1980s.

Since 2010, the annual price index has increased by as little as 0.1 percent and as much as 3.2 percent. During that same time frame, the annual average of wage increases ranged from 1.7 to 3.5 percent. That means, as the chief economist at job website Indeed.com told Politifact, "paychecks are keeping up with inflation."

Harris' office pointed Politifact to studies and news articles that say Americans' paychecks aren't keeping up with inflation. Those examples do identify points where inflation outpaced wage growth. But those sources focus on specific time frames, not the larger trend that spans decades.

Short- and long-term economic changes presumably both have a value to decisionmakers. But when considering Harris' claim, the lack of detail puts her assertion on shaky ground.