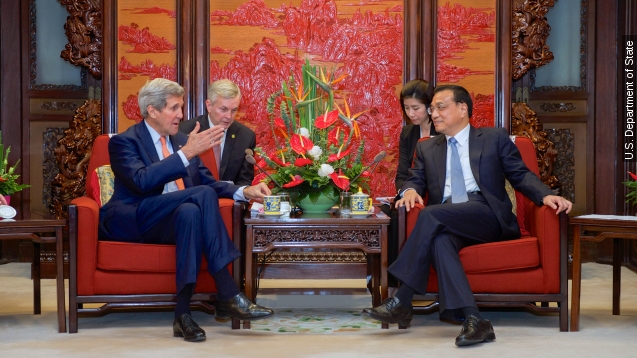 John Kerry is in China to talk about a lot of things, but the one that is dominating headlines — and creating tension — is the South China Sea.

It's one of the busiest shipping routes in the world and an area where China is dredging up reefs to create islands — and military outposts — despite multiple countries' claims over the region.

"And on the horizon what looks like land. An island where there shouldn't be one," reports the BBC.

Just days before Kerry made his way to China, The Wall Street Journal reported the U.S. military was considering sending aircraft and ships to within 12 miles of the man-made islands to keep watch — and to send a message to China that its actions in international waters won't fly. (Video via U.S. Navy)

Interesting timing. So with that report looming over the visit, Kerry went to China to, among other goals, pressure Chinese officials to back down.

But so far that message seems to have fallen on deaf ears.

Chinese officials responded by reiterating their claim to the islands.

During a joint press meeting, China's foreign minister said, "this is something that falls fully within the scope of China’s sovereignty. However ... we hope to continue to have dialogues to better our mutual understanding."

And Chinese media outlets reported China's rebuttal as a way of standing up to American pressure.

Chinese state-run news outlet Xinhua said China's ambassador to the U.S., "rebuked the claim made by some U.S. lawmakers ... that China is raising tensions in the South China Sea, citing that it was the active intervention by the United States in the maritime disputes that has actually created tensions in the area."

This is all part of the lead-up to a meeting in Washington next month to strengthen the U.S. and China's relationship and a visit from China's Leader Xi Jinping in September.