Getting To Know The Faces And Voices Behind The Spelling Bee 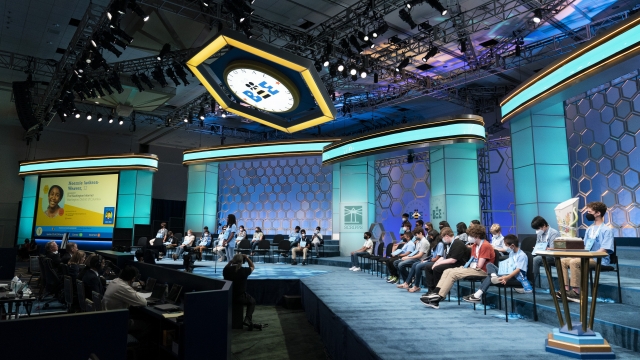 For 20 years, one voice has been the one challenging spellers on their way toward a national championship.

But pronouncer Jacques Bailly's history with the Scripps National Spelling Bee goes back even farther than that.

About a decade after his win, Bailly wanted to return to the Bee, so he wrote a letter and volunteered for any job Scripps would give him.

"I said, 'Hey, you know, I don't know if you remember me. But since then, I've learned a lot more French and a lot of German and Greek and Latin. And I really love spelling bees. And I'd love to be involved in any capacity whatsoever. So, if you need a volunteer, you know, hey, what can I do?'" said Bailly.

They needed an associate pronouncer; he took the gig, and the rest is history. Over his decades with the Bee, Bailly says the kids keep getting more and more impressive.

"A favorite part is when the kids ask questions and they say does this come from the root word era, the Latin era, which means yawn. And Dr. Sisa says yes, it just shows a depth of learning that is just so admirable and so cool. It connects these words to their history and their meaning and that's what it's all about. It's so much more than just you knowing the meanings," said Bailly.

He's arguably the biggest spell-ebrity here, but other familiar faces also help guide the kids through the week.

"This is my 13th Bee week, I think. So, it's just really great to be back," said Vanya Shivashankar

Shivashankar is the 2015 co-champion, and since winning, she's returned in a variety of roles. This year she took on the job of emcee for the first time, and shared some sage advice with the spellers.

"Before going on stage, my biggest tip really is just like, take in the moment. Really enjoy your time on stage, ask questions to the pronouncer is and enjoy being in front of the lights and the cameras and just stay calm and have fun on stage," said Shivashankar.

This year also brought a new host – LeVar Burton, who said he's most excited to tell the spellers' stories.

"You watch any kind of athletic competition, you know, the Olympics, it's the personal stories that draw you in. You begin to care about the athletes, right? You begin to root for your favorites. That's what this is about," said Burton

From pronouncers and judges to families and staff, everyone at the Bee is dedicated to giving these super spellers an unforgettable week.