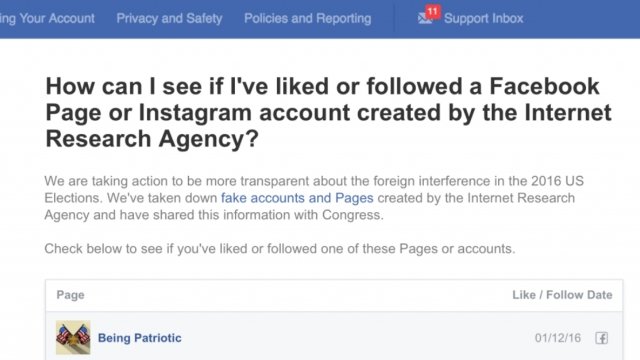 Facebook said it will launch a portal allowing users to see which pages or accounts linked to Russia they interacted with.

You may have wondered if you fell for any of those Russian-funded Facebook ads that appeared during the 2016 presidential race.

Facebook said it will launch a Help Center portal that allows users to see which pages or accounts linked to Russia's Internet Research Agency they interacted with.

Facebook's top lawyer told Congress as many as 126 million users saw Russia-linked content, which was designed to spur divisions regarding race, immigration, religion and policing in America.

The portal can't show you all the ads you saw, just the Russia-linked pages or accounts you liked or followed between January 2015 and August 2017. Facebook said the portal would be live by the end of this year.