Facebook's Unfollow Feature Could Clean Up Your Timeline 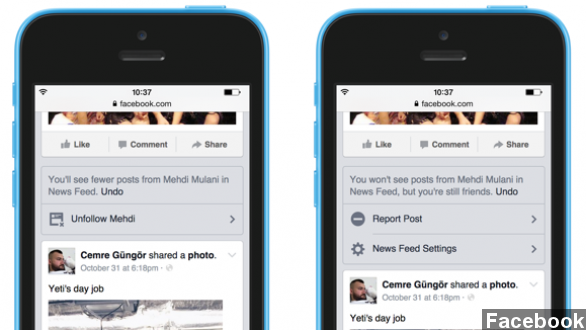 SMS
Facebook's Unfollow Feature Could Clean Up Your Timeline
By Evan Thomas
By Evan Thomas
November 8, 2014
Unfollowing will remove a Facebook friend’s posts from your timeline, without de-friending them.
SHOW TRANSCRIPT

Everyone has a few of those Facebook friends they’d rather just ignore — and thanks to a new Facebook tool, they can.

Facebook debuted the “unfollow” feature Friday, to more easily remove updates and content by specific people, pages and groups from your timeline.

“To see fewer stories from that person in your news feed, choose ‘see less from them.’ You can also choose to unfollow them to stop seeing their stories in news feed. Don’t worry, you’ll still be friends, and can re follow them at any time.”

The issue is control — though some outlets can’t seem to decide how much Facebook ceded to users.

Maybe, as VentureBeat writes, instead of “more” control, the word should be “easier” control.

“Today’s updates won’t change the fundamental way that the News Feed works, but it will give users more power so they can fix it for themselves.”

RE/code points out users were already able to unfollow anyone or anything before Friday’s announcement. Facebook is making it more intuitive in hopes that the whole experience will be improved.

“The company may start using this new settings page to gather more explicit signals about what you like and dislike in your feed.”

The timing is most likely intentional — during a town-hall meeting just hours before the update arrived, Facebook’s Mark Zuckerberg acknowledged users want a bigger say in how news feed works.

But there could be compromises — TechCrunch points out brands are on Facebook, too, and putting the user first could hurt their reach.

“Finally, Facebook is combatting this irrelevant information overload, even if that means helping you silence brands that paid for your Likes.”

Digiday suggests it’s a sort of incentive to be as compelling as possible.

“Brands and publishers that already do well on Facebook will see their reaches increase, while those that are unpopular … will fade into news feed oblivion.”

Unfollowing is available now on Facebook’s desktop client, and will come to mobile in the next few weeks.