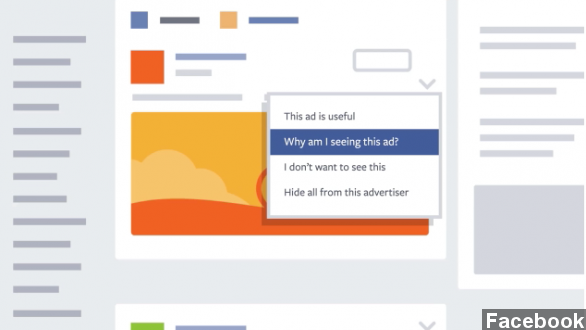 By Mikah Sargent
June 13, 2014
Facebook has announced it will track browsing activity to better serve ads on the site. The company will also give users more control over said ads.
SHOW TRANSCRIPT

Facebook has announced plans to track browsing history and app usage as part of its ad-serving platform.

What exactly does this mean? Websites plugged in to Facebook's advertising engine will give the company the ability to track your browsing history.

Say you're looking to purchase a grill and you visit sites to compare prices and features. Facebook can see your behavior and serve you ads for a grill you might be interested in.

This move, of course, comes with its fair share of backlash, but the social media company says it will also give users more control over the ads they see.

"To tell us how you feel about an ad, just click the top right corner of the ad and click or tap on 'Why am I seeing this ad?' From there you can learn more about the ad and update your preferences." (Via Facebook)

​​​An analyst for eMarketer told Advertising Age the dual​ announcement is no coincidence; it's a way to quell backlash. "By making these two announcements together, Facebook is saying, yes, we're gathering more data to target, but you have control over what data we're able to use."

And The New York Times quotes a privacy rights advocate who seems to agree. "The privacy announcements today are a political smokescreen to enable Facebook to engage in more data gathering. They claim to protect user privacy at the same time as they work to undermine it."

Even still, users can opt out of the browsing history tracking all together, but it's not a simple Facebook setting. You'll have to visit this page set up by the Digital Advertising Alliance and elect to opt out of individual or all companies tracking your data.

A tech analyst who spoke with The Wall Street Journal says even though critics will claim to be bothered by the move, in the end, these advertising practices are the norm.

"Yes, we're going to see a lot of people raise issues and raise a lot of concerns. But is it really going to get people to drop using Facebook? I don't think so. I think a lot of people are going to just accept it as part of how this business evolves." ​(Via The Wall Street Journal)

Facebook will begin rolling out the custom ad preferences in the next few weeks.