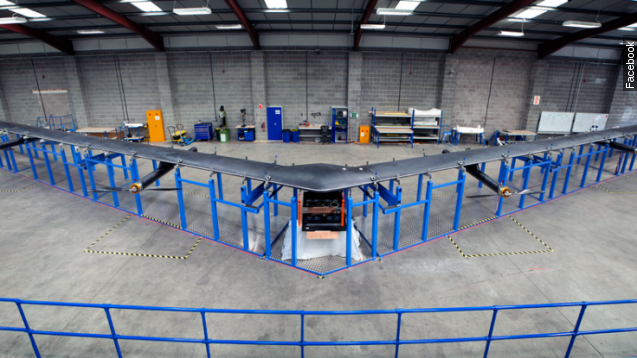 SMS
Facebook's Internet Drone Is Already Set For Flight Testing
By Evan Thomas
By Evan Thomas
July 31, 2015
A prototype of Aquila is ready for full-scale testing, and Facebook's engineers are working on new state-of-the-art data links for it.
SHOW TRANSCRIPT

Facebook is serious about this Internet drone thing. It’s announced the first prototype of Aquila is ready for flight testing.

The drone resembles a stealth bomber, but weighs less than a Prius. Its carbon-fiber frame has the wingspan of a 737, and is completely coated in solar panels to supply its flight power.

Facebook designed Aquila to loiter above remote areas for 90 days at a time, supplying broadband speeds from as high as 90,000 feet, anywhere in the world. For that, Facebook intends to supply it with a laser-based data link.

Its engineers are developing a system that can send and receive tens of gigabits of data a second; to and from dime-sized targets 10 miles away. They say that’s 10 times more advanced than the previous state of the art. (Video via Facebook)

But before it gets to lasering the Internet around, Facebook will have to deal with Internet laser drone regulation — or the near-complete lack of any such regulation so far. (Video via Internet.org)

The FCC doesn’t really have anything on airborne broadband lasers yet, because with the exception of some military and science applications, nobody has started using them. (Video via NASA)

On top of that, commercial drones in the U.S. are in a holding pattern until the FAA decides how to control them. (Video via CBS)

Aquila is in a higher weight class than the commercial drones the FAA’s regulations would regulate anyway, and would fly much higher than, say, delivery drones. (Video via Amazon)

The FAA issues special exemptions for flying in "low-risk, controlled environments," but it’s not clear if a 30,000-foot slice of the entire planet’s atmosphere qualifies.

Facebook is in talks with local governments and says it has interest from all 30 countries it’s approached so far, but can’t comment on specifics. Aquila’s first flight test, meanwhile, is scheduled for sometime late this year or early next. (Video via Facebook)

This video includes images from Facebook and music by Brenticus / CC by 3.0.