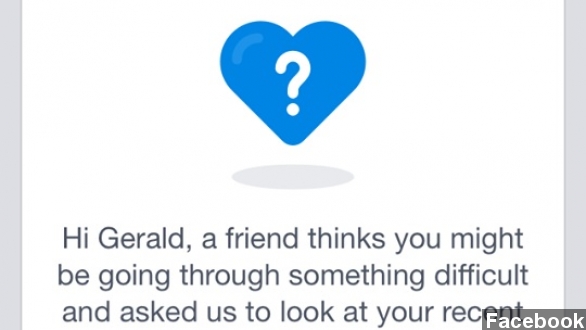 Facebook continues to roll out features that can play a role in its users' lives, on and offline.

This week, the Facebook safety team revamped the suicide-prevention feature it launched more than three years ago.

The feature will allow Facebook users to report any worrisome post from one of their friends; then, a team of experts will review the post to determine if it seems legitimate. If it appears the person could commit suicide, Facebook will send suicide prevention resources to the user.

Facebook said in a statement about the feature: "Keeping you safe is our most important responsibility on Facebook. ... For those who may need help we have significantly expanded the support and resources that are available to them the next time they log on."

All of this is a major upgrade from the original suicide prevention page, which required a lot more work from the user — including copying links, screen shots and email addresses.

The Facebook prevention feature is one of many that show the company's maturity. Aside from untagging yourself in embarrassing photos or blocking your ex-boyfriend, Facebook is slowly adding more important updates.

And about a month ago, Facebook announced a partnership with the National Center for Missing and Exploited Children — the group that issues Amber Alerts. Facebook will post Amber Alerts on the news feeds of users who are in the area where the child went missing.

Although some of these tools seem like no-brainers, most social media giants don't have them. Facebook says it will be rolling out these updates over the next couple of months.