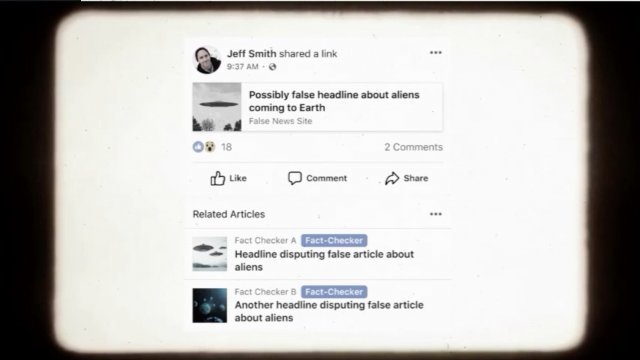 A "related articles" tool will replace the "disputed flags" tool that rolled out in 2016.

Facebook is ditching its fake news flags in exchange for a tool it says will work better.

The "disputed flags" tool rolled out in 2016. As the name suggests, if a third-party fact-checker identifies a story as false, a red icon would appear saying it's disputed and explain why.

The company says the privacy moves were based on feedback from users and organizations representing groups that routinely experience harassment.

But it turns out that tactic can actually backfire and make a person's beliefs even stronger. Now Facebook will use a "related articles" tool instead.

It works by placing related stories directly under a post to give more context. So if someone shares a false story, related articles with correct information would appear with it in the News Feed.

Facebook also notes most fake news is financially motivated. So it's going to continue demoting fake stories, which can cut their distribution by 80 percent.