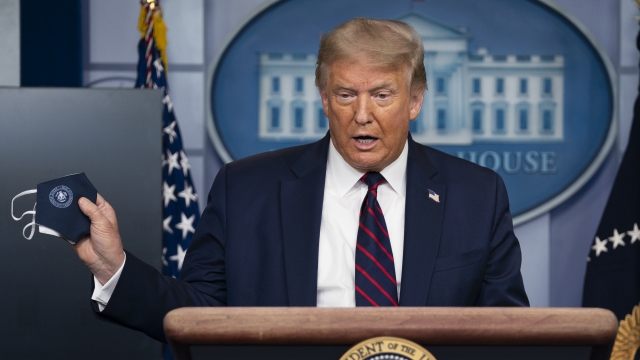 After President Donald Trump returned from Walter Reed Medical Center, he sent several messages out on social media downplaying the severity of the coronavirus. Now, some social media companies are taking action on those posts.

On Tuesday morning, Facebook took down a post from Trump which falsely claimed that COVID-19 is less deadly than the seasonal flu. A Facebook spokesperson told Newsy: "We remove incorrect information about the severity of COVID-19, and have now removed this post."

Instead, Twitter put the tweet behind a warning label for violating platform rules "about spreading misleading and potentially harmful information related to COVID-19." That label prevents users from liking the tweet, or retweeting it without comment.

Shortly after each company took action on his posts, President Trump tweeted “REPEAL SECTION 230!” Trump has sought to revoke the rule — which protects internet companies from being sued for enforcing their platform rules — because he says it’s used by the companies to unfairly remove conservative content. Section 230 experts disagree.

"The Republicans seem to be primarily concerned about the attempt, in their view, by platforms to silence as they see it," said Paul Barrett, deputy director at NYU Stern Center for Business and Human Rights, and author of the report 'Regulating Social Media: The Fight Over Section 230.' "I don't think there's actually any empirical support for this, but they want to see more expression and see the end of a certain amount of what they see as censorship.”

Even though the post only stayed up on Facebook for about two hours, it still garnered over 340,000 reactions, comments or shares, according to Crowdtangle data.