Facebook Says It Removed Hundreds Of Accounts In Myanmar 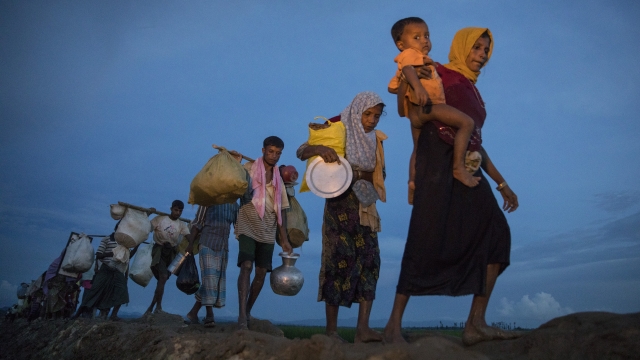 SMS
Facebook Says It Removed Hundreds Of Accounts In Myanmar
By Katie Cammarata
By Katie Cammarata
February 5, 2019
In addition, Facebook said it's "designating four more groups in Myanmar as dangerous organizations" and banning them.
SHOW TRANSCRIPT

Facebook says it's removed hundreds of accounts in Myanmar in the last six months for misrepresenting themselves. The pages that appeared to be independent news and entertainment pages were actually linked to Myanmar's military.

The social media giant also said in a statement on Tuesday that it is taking more action by "designating four more groups in Myanmar as dangerous organizations" and banning them.

These moves come after Facebook admitted back in November that it didn't do enough to prevent the violence against the Rohingya Muslims in Myanmar on its platform.

Here's a bit of context: Roughly 700,000 Rohingya have been living in overcrowded camps in Bangladesh after fleeing Myanmar military crackdowns in August 2017. The U.N. has said Myanmar committed human rights violations against the Rohingya and called those violations "the gravest crimes under international law." The government is accused of killing thousands of Rohingya civilians and burning hundreds of settlements. Myanmar says it was responding to attacks by Rohingya militants.

Facebook asked the independent, non-profit Business for Social Responsibility to look into the platform's impact on human rights in Myanmar. The 62-page resulting report noted that Facebook's platform was being used to "spread hate speech, incite violence, and coordinate harm." It concluded that before last year, Facebook didn't do enough to prevent its platform from being used to cause offline harm.

In its Tuesday statement, the social media company said it wants to "do the best [it] can to limit incitement and hate that furthers an already deadly conflict."