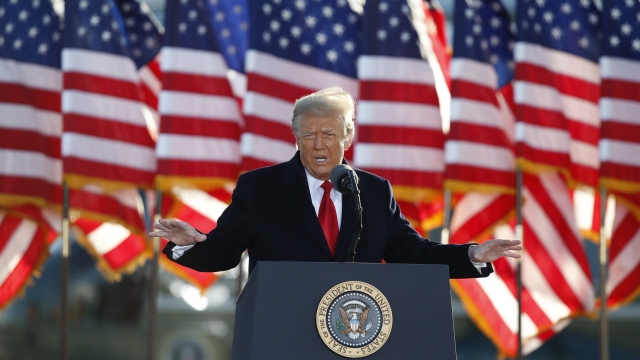 Former President Donald Trump is still off Facebook, for now.

“We felt it was a bit lazy of Facebook to send over to us a penalty suggestion that didn’t exist in their own rulebook," said Helle Thorning-Schmidt, former prime minister of Denmark and member of the Facebook Oversight Board, during an Axios event.

In its decision, the Facebook Oversight Board said it “was not appropriate for Facebook to impose the indeterminate and standardless penalty of indefinite suspension,” a penalty outside its normal rules. The board gave Facebook six months to figure out a “proportionate response.”

Which means it’s entirely possible we could see the 45th president back in the social media sphere.

"Based on our history with Facebook, in which they have repeatedly bent over backwards to appease Trump, to appease his right-wing allies, we are very concerned that they will use this six months, or whenever they make their decision -- that date to let him back," said Eric Naing, spokesperson for Muslim Advocates.

"I think it's much more likely that they'll go back and say, 'Donald Trump abused our platform repeatedly and dangerously, and here are the multiple reasons why we think banning him permanently is appropriate,'" said Paul Barrett, deputy director of the New York University's Stern Center on Human Rights.

Experts also wondered what the point is of the Oversight Board — an appointed group of experts outside the company — given that it took months for them to come to a ruling that Facebook could have made itself.

"Did we really need to create this Byzantine structure and an independent trust and get leading thinkers across the globe to say, like, 'Hey, come up with better policies and implement them in a clear, coherent and consistent manner.' Facebook has plenty of people internally that do these things," said Gautam Hans, director of Vanderbilt University's Stanton Foundation First Amendment Clinic.

"I just think it shows that this board isn't set up to hold Facebook accountable in a timely fashion," said Jessica González, CEO of Free Press.