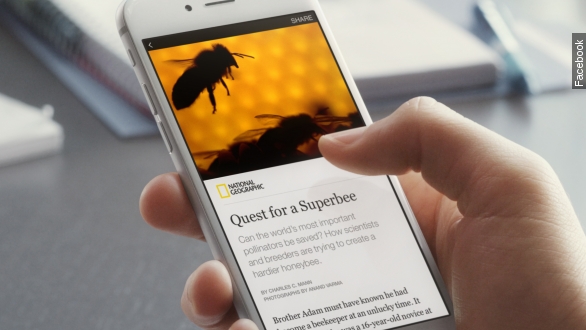 Publishers get a sweet revenue deal by sending stories through Instant Articles, as long as everyone's OK with Facebook controlling so much traffic.

And as the name suggests, Facebook put an emphasis on speed. Full articles — including autoplay video — can load as much as 10 times faster than traditional news articles on Facebook, like in your feed or on your wall. Partners include The New York Times, NBC, The Guardian, The Atlantic, National Geographic and the BBC.

There's just one problem, per The Wall Street Journal — the move "risks deepening their reliance on the social network for traffic."

Consider headlines like these. The word "gatekeeper" is getting kicked around, but by some metrics it's already way too late to worry about that.

As The Wall Street Journal reports, Facebook has twice the user engagement of other social networks, and it recently dethroned Google as king of traffic referrers. Some sites report the social network is responsible for 70 percent of all their traffic.

A Pew study released last month shows 78 percent of news outlets now see more visits coming from mobile devices — where Facebook gets most of its traffic — than from traditional computers.

"For independent publishers, it's kind of an existential question: Do you want to go where your audience is and potentially be over-reliant on a source such as Facebook for your audience?" John Battelle asked on Bloomberg Tuesday.

At Marketing Land, Danny Sullivan writes: "The bigger concern to me is that having a giant like Facebook suck so much content effectively within its walled garden gives license for that other giant, Google, to do the same."

For now, though, it's a killer deal for publishers. They get 100 percent of the revenue from ads embedded in their instant stories and have an option to send any unsold ad inventory out through Facebook's own network for a 70 percent cut.

"All they have to do," writes Re/code, "is hope Facebook continues to use its enormous power to help, not hurt them. And that it doesn't change the rules someday."

Instant Articles is live now for mobile users on iPhone. Facebook promises more articles will be released in the coming months.