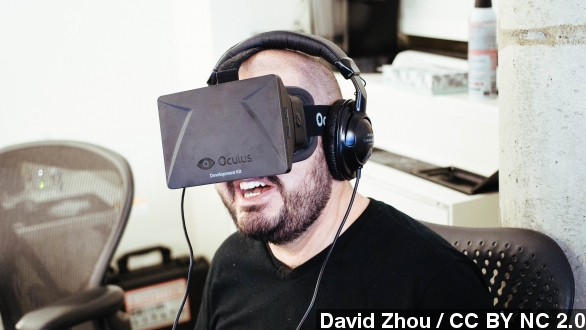 SMS
Facebook Is Planning Virtual Reality Apps For Everyone
By Evan Thomas
By Evan Thomas
February 18, 2015
Facebook wants all its users to be able to create and upload content for virtual reality systems such as Oculus Rift.
SHOW TRANSCRIPT

Status updates on Facebook could soon feel much more real. Facebook is said to be working on new apps that will give the site a virtual reality twist.

"I think the version of the world where you're sending a fuller, immersive picture of what you're doing," said Cox.

"And you think people will be creating that experience, or will they rely on publishers to do it?" asked Re/code's Peter Kafka.

This has been part of the plan since Facebook plunked down $2 billion for virtual reality headset maker Oculus. As Mark Zuckerberg put it: "Imagine sharing not just moments with your friends online, but entire experiences and adventures."

Oculus founder Palmer Luckey was a bit less poetic at the Consumer Electronics Show this year: (Video via Oculus VR)

"Looking at a larger than life News Feed or someone's photos in VR isn't interesting. It needs to be new experience. I don't think it's going to be Facebook the social network in VR, but people are narcissists and they want people to see what they think are their amazing lives."

When that will happen is still up in the air. Consuming that kind of content, much less creating it, requires specialized hardware that's nowhere near mainstream yet.

Consider Oculus, which has two Rift development kits for early adopters and programmers. It cranked out more than 60,000 of the first prototype before production stopped. And Oculus CEO Brendan Iribe says more than 100,000 of the second version have shipped as of February 2015. We'll round up and call it 200,000 Rifts in the wild.

Compare that to the userbase of Facebook as of Q4: 1.39 billion monthly active users. Only about 200 million of them access the site on a traditional computer, which as of right now is required to run a Rift headset.

How these back-of-the-envelope calculations will change depends, in part, on when Oculus' consumer version hits shelves and how much it costs. A release date is slated for sometime in 2015, and price has yet to be announced.