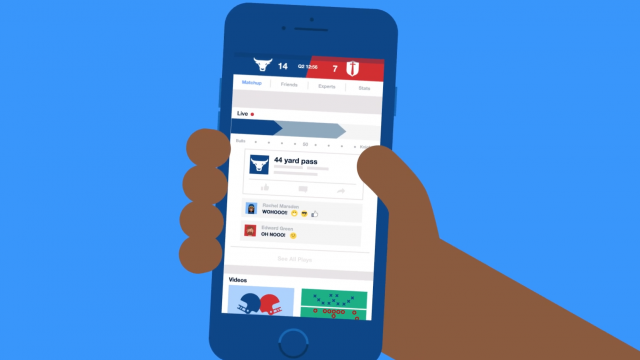 Attention, sports fans! Facebook is adding a feature that'll make it that much easier to keep up with your favorite teams and share all your trash-talking and hot takes. (Video via SportsMania / CC BY 3.0)

It's called Facebook Sports Stadium, and it's essentially a hub chock-full of content related to whatever sports game you're watching. Well, it's only for American football for now, but the company says it's adding in other sports soon.

You can keep an eye on stats and scores, all of which are updated live; you can find out where to watch the game on TV; you can see sports commentary from journalists and others; and you can see what your friends are saying about the game.

Hmm, that kind of reminds us of another social network's sports-monitoring feature. Hint: We're talking about Twitter's fascination with the World Cup.

It seems every social network is trying its hand at improving your entertainment viewing through engagement. In fact, Facebook describes the feature as "a second-screen experience that we hope makes watching the broadcast even better."

Hey, there's nothing quite like keeping your eyes glued to your smartphone instead of on the game to improve the experience.

You can find Facebook Sports Stadium by searching for a game. The company says the new feature is currently only available on the iPhone in the U.S., but it plans to add more platforms "in the coming weeks."