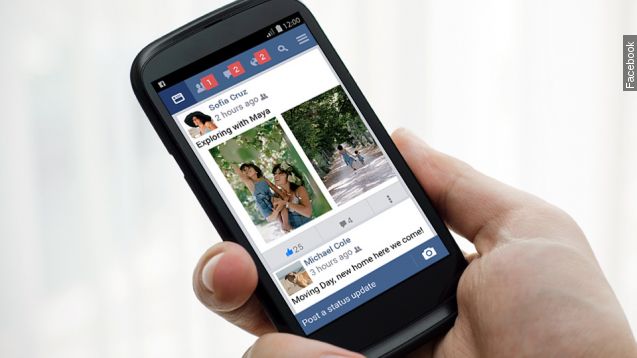 SMS
Facebook Goes Lite In Attempt To Reach Global Users
By Jake Godin
By Jake Godin
June 5, 2015
As a part of its initiative at giving folks across the world better access to Facebook, the social media giant has released Facebook Lite for Android.
SHOW TRANSCRIPT

In a move to reach budding markets far and away from its home in Menlo Park, California, Facebook released a new app called Facebook Lite on Thursday.

The idea is simple: Some parts of the world just don’t have the bandwidth to handle using the normal Facebook app or its mobile webpage.

Enter: Facebook Lite. Billed as less than a megabyte in size, Facebook says the app will help folks in countries with poor bandwidth or low-tech phones connect to its social media network.

If you're having trouble imagining what that'd look like — just think of a bare-bones Facebook but stripped of all the extra features that've been added over the years like videos or geolocation services.

“One-third of the world is connected to the Internet. The majority are not.”

The purpose of the app lines up with Facebook's Internet.org initiative, which aims to bring the Internet to as many people as possible across the world.

Though making a light version of an app you already have is arguably easier than, say, building a solar-powered drone meant to beam Internet connections to remote parts of the world.

Such lofty ambitions haven't been immune to criticism though — some have suggested that Facebook's Internet.org could — intentionally or otherwise — create a sort of "Walled Garden" where those without Internet access are given Facebook content first and everything else second. (Video via Facebook)

Facebook’s not the only player in the “Internet for all” game, either — Google’s Android One initiative is meant to provide low-cost phones streamlined specifically for low-bandwidth parts of the world.

Facebook Lite is available now in parts of Asia and will be available in parts of Latin America, Africa and Europe in the coming weeks. Unfortunately, it’s not available for those of us in the states, but then again, it’s not really built for that. (Video via TechCrunch)