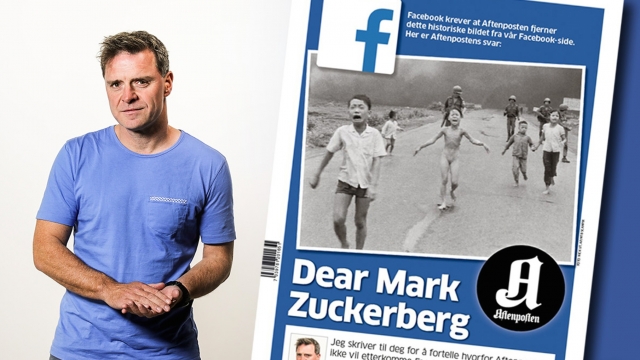 Espen Egil Hansen is the editor-in-chief of Aftenposten, Norway's largest newspaper. And he's just one of many people upset with Facebook CEO Mark Zuckerburg after the social media site censored an iconic Vietnam War photo. It showed a young girl named Kim Phuc running naked down a road after her village was hit by napalm.

"Mark, I believe you impair our ability to do our job," Hansen said in a video on Aftenposten's website.

It all started a few weeks ago when Norwegian author Tom Egeland got on Facebook and shared the photo along with several others that he said changed the history of warfare.

Facebook's moderators removed the photo from his page.

And when he tried to repost it along with an interview with Phuc criticizing Facebook's attempt to censor the image, he says his account was suspended for 24 hours.

When Hansen heard about the ordeal, he decided to post the photo and an accompanying article on Aftenposten's Facebook page.

On Friday, Hansen penned an open letter to Mark Zuckerberg echoing what many critics are saying about Facebook's decision.

The letter reads, in part: "Facebook has become a world-leading platform for spreading information, for debate and for social contact between persons. You have gained this position because you deserve it. But, dear Mark, you are the world's most powerful editor."

Facebook said in a statement Friday it has reviewed its community standards in this case and "decided to reinstate the image on Facebook where we are aware it has been removed."