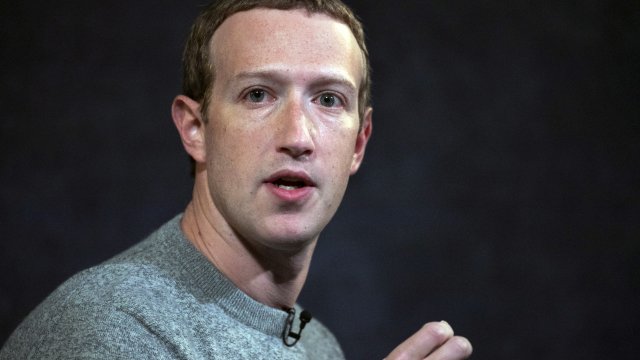 SMS
Facebook CEO: 'We May Not Know The Final Result On Election Night'

Facebook CEO Mark Zuckerberg wants Americans to get used to the idea of election results being delayed. In a new interview with Axios on HBO, Zuckerberg said there would be nothing wrong with a delay. In fact, he said it might be necessary this year.

"One of the things that I think we and other media need to start doing is preparing the American people that there's nothing illegitimate about this election taking additional days or even weeks to make sure that all the votes are counted," Zuckerberg said. "In fact, that might be important to make sure that this is a legitimate and fair election."

Zuckerberg said Facebook is planning messaging strategy to explain why it will take longer to count ballots this year, with millions more being sent in by mail than ever before.

"So if one of the candidates and any of the races claims victory before there's a consensus result, then we're going to add some informational context to that post directly saying that that there is no consensus result yet," Zuckerberg said.

Zuckerberg is trying to turn the page from what was universally described as a failure in the 2016 election. Facebook was slow to respond to interference, especially from Russia. It began verifying the identity of ad buyers in 2018. And Facebook says it will restrict new political ad buys in the week before the election.

Facebook has already removed posts from President Trump — including for spreading disinformation about COVID-19 and hate. Under these new policies, experts predict there are likely to be more clashes with the president. Just last week, the president was criticized for advice he offered his supporters in North Carolina.

"On election day or early voting, go to your polling place, even though you've mailed it in, go to your polling place to see whether or not your mailing vote has been tabulated or accounted," President Trump told supporters on Sept. 4. "If it has, you will not be able to vote, because it's going to be counted... If it has not been counted-- vote, which is every citizen's right to do."

If a voter knowingly casts their ballot twice, they'd be breaking the law.

"It is, it is a felony. It's a felony the state of Delaware," former Vice President Joe Biden responded. "I think it's all designed to create so much chaos that no matter what the outcome of the election is, that it's thrown up in the air."

Expect to see more election fact-checks from Facebook on your feed.