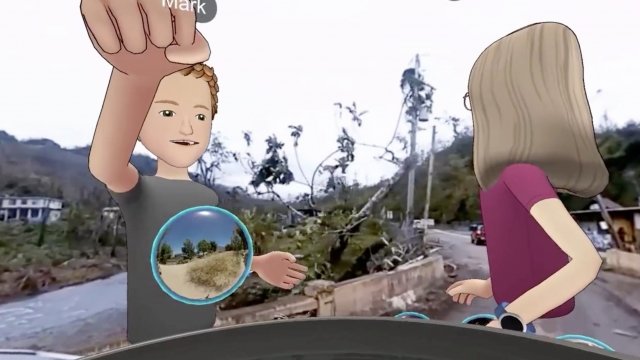 Zuckerberg also used the moment to highlight his company's $1.5 million donation to Puerto Rico relief, as well as Facebook's  initiative to restore the territory's telecommunications capability.

But the whimsical look of Spaces struck kind of the wrong chord when set against the destruction in Puerto Rico — and some viewers accused Zuckerberg of trying to use the tragedy to sell products.

Facebook's pitch for Spaces focused on its use in more lighthearted moments. Later in the video, Zuckerberg used it to virtually walk on the moon and get a mouse-sized view of his sentient mop of a dog, Beast.

But Facebook's products and features don't always wind up working as intended. The company's efforts to resurface nostalgic posts, for example, infamously started unearthing tragic memories of deaths and destruction.

Zuckerberg later addressed the controversy, saying he meant to show how VR can raise awareness of disasters. He wrote: "I realize this wasn't clear, and I'm sorry to anyone this offended."