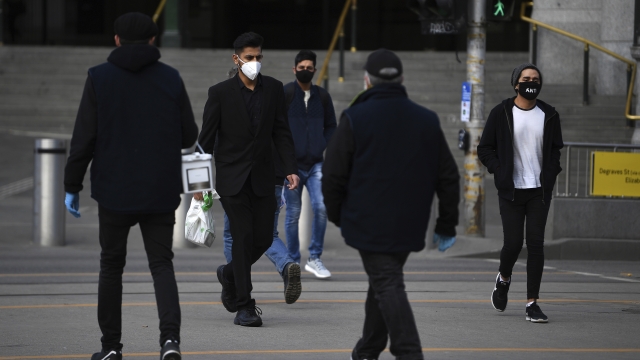 SMS
Face Mask Rule Takes Effect In Australia's Second-Largest City
By Katherine Biek
By Katherine Biek
July 23, 2020
Anyone caught not wearing a mask or covering faces a fine of more than $140.
SHOW TRANSCRIPT

Melbourne now requires people to wear some sort of face covering while out in public. Anyone caught not wearing a mask or covering faces a fine of more than $140. And employers who discourage their workers from obeying the rule will be fined more than $7,000.

Melbourne resident Aleece Eaves: "I think it's been overdue really. Like, it's an easy enough thing that we can all do just to make this go better for everyone."

Melbourne resident Lina Lim: "I feel much more safe because I have to be at work. So kind of helps in a way."

There are exceptions to the mandate. Children under the age of 12 do not have to comply, as well as people with certain medical conditions.

The face mask rule is the latest order imposed by the Victoria state government in an attempt to slow the spread of the coronavirus.

Victoria Premier Daniel Andrews: "I think it's pretty simple, frankly, but as challenging as some may find wearing masks, we'll see the benefits of that in the days and probably the weeks to come."

Victoria's seen a recent surge in COVID-19 cases. On Thursday, health officials reported over 400 new cases — which is the state's third-highest daily increase since the pandemic began. The majority of Victoria's cases are in Melbourne.

Because of this, authorities have reimposed lockdown measures in the city, only allowing residents to leave their homes for work, grocery shopping, care giving and exercising.