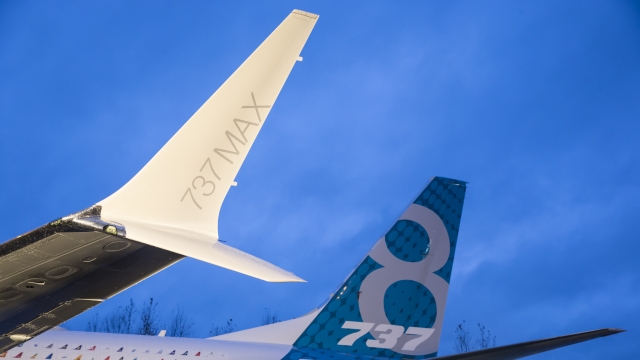 SMS
FAA Chief Tests Boeing 737 Max Software Updates In Flight Simulator
By Katherine Biek
By Katherine Biek
September 20, 2019
The FAA did not disclose anything about the performance of the updated flight controls.
SHOW TRANSCRIPT

During a visit to a Boeing facility in Washington state, the head of the Federal Aviation Administration tested software fixes engineers have made to the 737 Max aircraft.

While the FAA confirmed Stephen Dickson took a turn in Boeing's flight simulator, it did not say anything about the performance of the updated flight controls.

Investigators have yet to determine the exact causes of the 2018 Lion Air crash and the Ethiopian Airlines crash in March. But preliminary reports suggest pilots of both planes may have had trouble with the angle-of-attack sensors.

After the two crashes, Boeing admitted its engineers discovered a flaw with that safety feature back in 2017, though at the time it concluded the non-working alert "did not adversely impact airplane safety or operation." The angle-of-attack disagree alert is meant to tell pilots if the plane's sensors are transmitting false data about the pitch of the plane's nose.

That disagree alert was supposed to be a standard feature on all 737 Max planes. But Boeing's engineers found it would only work if airlines also purchased a separate, optional feature.

Boeing hopes to get its grounded 737 Max aircraft back in the air in the U.S. by the end of the year. Though the Associated Press reported the company has yet to submit its safety analysis of the software updates to the FAA.

Dickson, who took over as FAA administrator in August, said he plans to fly a 737 Max plane himself before signing off on the certification.