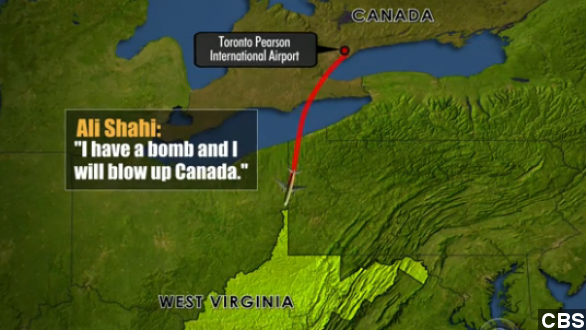 By Ben Lawson
July 25, 2014
Passengers captured video of tactical police officers storming the plane and shouting "hands up, heads down," once it arrived safely back in Canada.
SHOW TRANSCRIPT

A Canadian man is in custody after allegedly threatening to blow up a passenger plane mid-flight.

The National Post reports Ali Shahi became unruly while on board Sunwing Flight 772 Friday and allegedly threatened to "blow up" the plane, forcing it to turn around and head back to the Toronto airport it departed from.

Passengers captured video of tactical police officers storming the plane and shouting "hands up, heads down," once it arrived safely back in Canada. (Via CBS)

Two NORAD F-16 fighter jets met the plane over West Virginia and shadowed it all the way back to Toronto before returning to their home base.

Shahi was charged with "mischief to property, mischief interfering with lawful enjoyment of property, uttering threats and endangering the safety of an aircraft." (Via CTV)

"He said he didn’t care what happened to the plane or the people on it ... He didn’t care about the consequences of his actions, he literally didn’t care if the plane went down.” (Via Global News)

Shahi's father is claiming his son has mental health issues. CBC quotes him saying: "I am sorry for what happened on the flight, but Ali is not at fault. I blame the police and health system."

Shahi has a bail hearing scheduled in Ontario Saturday morning.