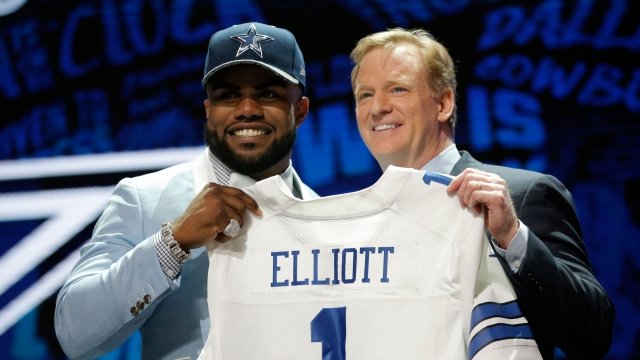 An NFL-appointed arbitrator has ruled that the league's suspension for Dallas Cowboys running back Ezekiel Elliott will be upheld.

Elliott was accused of domestic violence, though charges were never filed. After a yearlong investigation of its own, the NFL banned him for six games.

The NFL said there was evidence Elliott "used physical force" on a woman he had been romantically involved with. Elliott said the NFL report on the incident excluded the lead investigator's claim that the accuser wasn't credible.

Elliott's attorney said he was "extremely disappointed" with the ruling and that the arbitrator failed to "navigate through league politics." An NFL spokesman said: "They're trying to create a grand conspiracy story where none exists."

The suspension won't keep Elliott from playing in Week 1, though. The arbitrator didn't meet the deadline to rule on Elliott's suspension, so Elliott can play this Sunday.

Lots of fans and members of the media have criticized the NFL for how it's handled recent domestic violence incidents involving players, saying the league was too lenient. Now, many are saying the NFL is overcorrecting.

"When you look at where this stands, it doesn't look really good for the league right now," ESPN reporter Jason Reid said on SportsCenter.

"Right now I look here and just go, 'Man, the NFL, you have botched this in a big-time way,'" ProFootballTalk host Chris Simms said.

Elliott has an ongoing lawsuit against the NFL to fight the suspension. He says he's looking forward to his day in court.