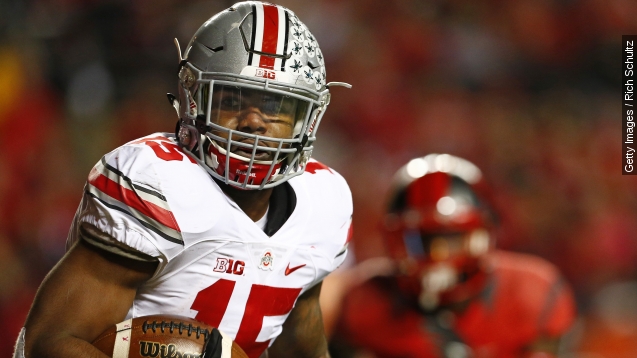 Against a banged up Michigan State squad, Ohio State was supposed to walk away with a win on Saturday. But the Buckeyes lost the game, their national championship hopes and some of their standout players all in one night.

"Honestly, this is my last game in the shoe. There's no chance of me coming back next year. ... I just want to thank Buckeye nation for making this place so special," Elliott said.

After the game, running back Ezekiel Elliott, who was audibly frustrated with the Buckeyes coaches, confirmed he wouldn't be back at Ohio State next year.

That's similar to what quarterback Cardale Jones posted after the game too with a picture of his last time walking into The Shoe.

It's not that the announcements weren't expected, but they felt like salt in the wound so soon after Michigan State put a kink in the Buckeyes' national championship plans.

As long as Michigan State can hold off Penn State at home next week, they'll travel to the Big 10 championship game, which means Ohio State won't have that extra chance to impress playoff committee voters. (Video via Big 10 Conference)

The good news for Buckeye's fans, if there is any, is current starting quarterback JT Barrett should be back next season with a strong recruiting class around him, so Ohio State could bounce back quickly. (Video via WOSN)

Elliott is projected to be drafted in the first round of the 2016 NFL draft, although Jones' draft stock appears to still be in flux.

The Buckeyes take on the Michigan Wolverines for their final game of the season on Saturday.