G-20 Summits Have Yielded Results, But This Year All Eyes Are on Trump 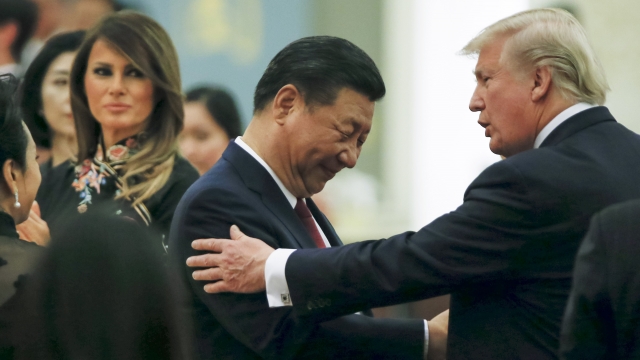 SMS
G-20 Summits Have Yielded Results, But This Year All Eyes Are on Trump
By Peter Hecht
By Peter Hecht
June 26, 2019
U.S.-China trade war, other challenges test this week's "Group of 20" summit as world leaders convene in Japan on Friday and Saturday.
SHOW TRANSCRIPT

Global leaders in the Group of 20 meet in Osaka, Japan this week amid tensions over President Donald Trump's trade war with China and fears of rippling effects on world markets.

The G-20, including the United States, 18 other countries and the European Union, was formed in 1999 to deal with issues like this.

Before the G-20, there was just the G-7, an exclusive club of industrial powers, the U.S., the U.K., Germany, Italy, Japan, Canada and France. The G-20 now seeks broader cooperation, with G-7 members along with nations such as China, Russia, Brazil, India, Mexico and Saudi Arabia.

President George W. Bush turned to the G-20 in 2008 to coordinate an international response to the global financial crisis.

In 2015, G-20 leaders agreed to share intelligence after terrorist attacks in France and to work to cut off financing for the Islamic State group.

In 2016, the two leading emitters of greenhouse gases - the United States and China - agreed at the G-20 summit to ratify the Paris Agreement on combating climate change.

Japanese Prime Minister Abe Shinzo, host of the Friday and Saturday gathering in Osaka, called for cooperation on global economic growth and building an "inclusive and sustainable human-centered future society."

But this year, all eyes will be on President Trump. He will meet with Chinese President Xi Jinping in a session seeking to diffuse the trade war between the world's largest economies. It is blamed for worsening a global economic slowdown.

The prime minister of Malaysia, for one, says he isn't optimistic for results due to the unpredictability of the U.S. leader.

“I am not so hopeful. Unfortunately America has a president who is determined but erratic. I mean, the Chinese have their pride. They are also...a 4,000-year-old civilization. They have never really been subjugated."

Demonstrators, anticipated in vast numbers, are expected to call attention to both matters. If history is a guide, they will also decry globalization, the clout of corporations and financial institutions and costs of the G-20 summit itself - in the face of global poverty.