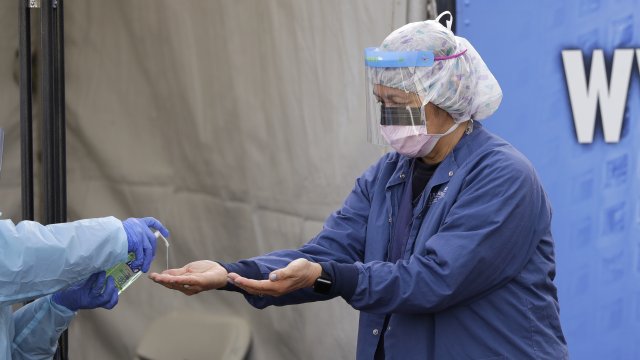 Puzanov told Newsy, "It was very difficult in the beginning to convince people that it's going to be serious. Everybody is really convinced that we have all the protective gear we can have, which eventually proved not to be true."

The masks aren't fine enough to filter the virus out of the air, but they do offer some protection from airborne droplets expelled by coughs and sneezes.

Puzanov says the masks are primarily going to doctors and nurses who've asked for more protective equipment. Hospitals around the country haven't been able to get all of the vital equipment they need to protect their workers.

Puzanov said, "We should probably move some of the production of essential and vital stuff back to U.S. We should have some stuff which has been made on land here when we need it."

One of the reasons protective equipment is in such short supply is that exports from other countries have been drying up. A report from Global Trade Alert found 54 countries and counting have imposed some sort of restriction on exports.

Simon Evenett, a professor of international trade at the Unversity of St. Gallen, told Newsy, "What some countries do is to reflexively say, 'Well, we've just got to grab whatever stock is there at the moment.' And so it's often framed in terms of securing medical supplies as if they were suddenly going to be lost."

By limiting exports out of the country, nations hope to preserve domestic production of those goods for their own use. That's how the European Union justifies its new restrictions on selling medical gear outside of the bloc.

But export limits can actually end up hurting a country's ability to make key supplies — it's harder to convince companies to ramp up production on those supplies if they're cut off from customers overseas.

Evenett told Newsy, "These policies have been found to be very counterproductive. They typically do not lead to greater medium-term or even near-term increases in supply."

Exports of protective gear are starting to flow from China again — though not yet in the quantities that hospitals need. Until China can match those levels, doctors and nurses may have to keep relying on homemade masks to keep them safe.

Puzanov told Newsy, "This is not the first and it is not the last virus blowing through this world. It's going to happen again in some shape and form. And we should be much more ready for that."