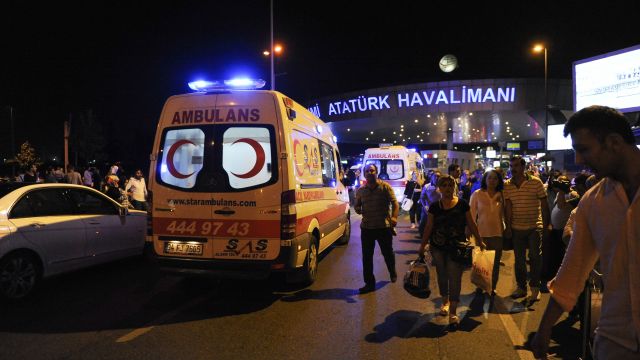 More than 30 people are dead and around 150 others injured after explosions and gunfire rocked Istanbul's Ataturk Airport.

The New York Times reports that police fired at two of the bombers inside the airport's international terminal before they detonated their explosives.

Flights in and out of Ataturk were stopped, and a U.S. official told ABC that all U.S. flights going to or from Istanbul have been suspended.

The attack happened just one day after the U.S. Department of State updated its travel warning for Turkey, advising Americans of increased threats from terrorist groups.

Facebook activated its Safety Check feature and the State Department urged Americans in Turkey to check in on social media to let friends and family know they're safe.

After news of the explosions spread, the airport's website was overwhelmed with traffic forcing the page to stop displaying their normal website and show only a list of scheduled flights.

Ataturk Airport is the country's largest airport and one of the busiest in the world. The BBC reports that other bombings in Turkey have been linked to ISIS or Kurdish separatist groups. The most recent attack, a car bombing on June 6, killed 11 people, but neither terrorist group claimed responsibility for it.

This video includes clips from CNN Türk, DHA and NTV and images from Getty Images.