Explosion Kills At Least 28 Near Turkish Parliament In Ankara 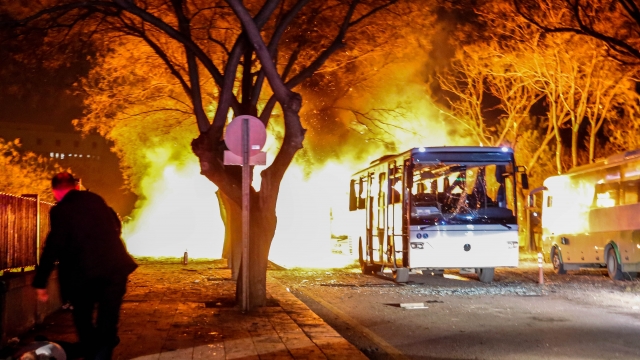 SMS
Explosion Kills At Least 28 Near Turkish Parliament In Ankara
By Grant Suneson
By Grant Suneson
February 17, 2016
Turkish authorities believe an explosive-filled car detonated, killing more than 28 people. No group has yet claimed responsibility for the attack.
SHOW TRANSCRIPT

At least 28 people were killed and dozens more wounded by an explosion near the Turkish parliament in the country’s capital city of Ankara.

Authorities said an explosive-filled car detonated at an intersection when three military vehicles were nearby.

Turkish President Recep Tayyip Erdogan said, "Our determination to respond in kind against such attacks against our unity and future from outside and inside is even more strengthened through such attacks."

No group has claimed responsibility for the explosion, but security forces are reportedly looking into both ISIS and the militant separatist group PKK, also known as the Kurdistan Workers' Party.

Turkey had just recently increased its military intervention in Syria, shelling Kurdish militia members it believes are working with the PKK. Turkey also allowed coalition forces fighting ISIS to use one of its air bases.

In the past year, Turkey has seen several deadly bombings including a double-suicide attack in Ankara that killed more than 100 people at a Kurdish peace rally.

This video includes images from Getty Images and clips from BBC, CNN and Hurriyet.