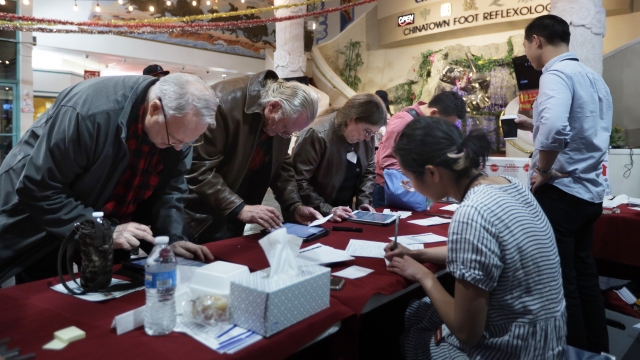 The Nevada State Democratic Party is hoping to avoid the chaos of the Iowa caucuses as it gears up for its own caucus day.It scrapped earlier plans to use the same mobile app that faltered in Iowa, leading to confusion and delayed results in the Hawkeye State.

But Nevada faces a challenge Iowa did not: The state has four days of early voting in addition to its Saturday caucuses. And just days before voting started, Democrats turned to another form of technology which could make the process more vulnerable -- iPads with a Google form to check in early voters.

Experts fear that approach leaves open security gaps -- especially because the iPads, purchased by the state's Democratic Party, could theoretically be connected to unsecured WiFi networks.

"We put in place a number of mechanisms to ensure that every step of the way, you know, we protect the integrity of this process and that it remains secure."

Forgey says the party has been consulting with the Department of Homeland Security, the Democratic National Committee, and security experts. A Homeland Security spokesperson confirmed to Newsy that it was working with the DNC and Nevada’s Democrats, and “will continue to provide any support they request.”

Forgey says the iPads will primarily run over 4G cellular networks, and that the Google form was rolled out days ago to train volunteers.

Still. There is the uncertainty of using technology for the first time.

"We are counting on this untested tool that we haven’t been trained on and if it doesn’t work, when I asked in the training, they said, 'Call us.'"

Nevada Democrats tell Newsy that precinct chairs will access early voter totals through the Google form, helping them do the math on caucus day -- a sort of “caucus calculator.” The party says results will be reported on a secure, dedicated hotline for precinct chairs.

But problems cropped up the first day of early voting. More than 18,000 people showed up, causing long lines. Some precincts eliminated the Google form to speed up the wait. There were also reports of technical difficulties, and concerns that volunteers may not truly understand how to tabulate rounds of voting with the digital form.

But Forgey says the party feels confident in their new tactics.

We want to make sure that the voice of Nevada Democrats is protected and the integrity of this process is protected.