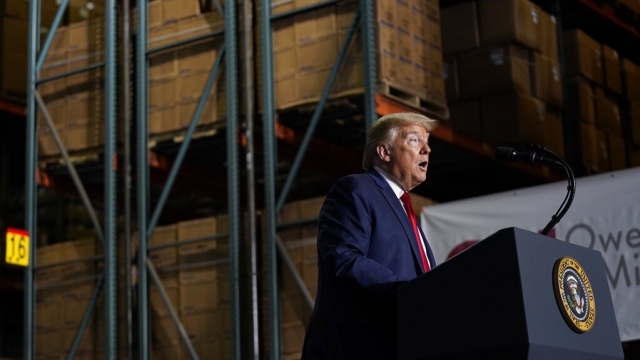 In a new executive order, President Trump says his team will coordinate a massive effort to expand and refocus the Strategic National Stockpile after it ran out of critical medical supplies soon after the coronavirus pandemic hit the U.S.

It’s an ambitious plan that will help better prepare for a pandemic, but one that experts say should have been enacted much sooner.

"The reality is, this should have and could have been done years ago, whether that's during the Trump administration or during the Obama administration, because deficits of the stockpile were known for the last decade," said Ellen Carlin, an assistant professor at the Georgetown University Center for Global Health Science and Security.

President Trump and other top officials coordinating the response to the pandemic argue that the Strategic National Stockpile, also known as the SNS, wasn't meant to be a stopgap for an outbreak like COVID-19.

"The previous SNS stockpile was not designed for pandemics, it was designed for something much different. So the goal is to have more on the shelf, as much as 90 days," Federal Emergency Management Agency Administrator Pete Gaynor told Newsy.

Although the SNS has been around since the '90s, it was majorly expanded for biodefense in the wake of the 9/11 terrorist attacks.

"It was really meant to be available so that if we had an anthrax attack, that was far worse than what we experienced in 2001, for example, or we experienced a chemical incident on a mass scale, we would have availabilities," Carlin said.

But she says federal officials have known for 10-15 years that an emerging infectious disease like the coronavirus posed as much of a threat to Americans as bioterrorism.

"I think that this idea that the stockpile really wasn't intended for emerging infectious diseases is a bit disingenuous. The statutory language has been modified over the years, and if you look at it, it actually does offer plenty of leeway for the stockpile to acquire material that would be useful for an emerging infectious disease," Carlin said.

Now, FEMA Administrator Gaynor says the Trump administration will work with U.S. manufacturers to acquire a 90-day supply of critical gear like masks, gowns, gloves and ventilators that will be rotated continuously. It's unclear how long that will take.

"The overarching goal is for the U.S. to become more independent from foreign sources, more self sufficient, and more resilient in a pandemic or other disaster," Gaynor said.