Convention Polling 'Bounces' Aren't What They Used To Be 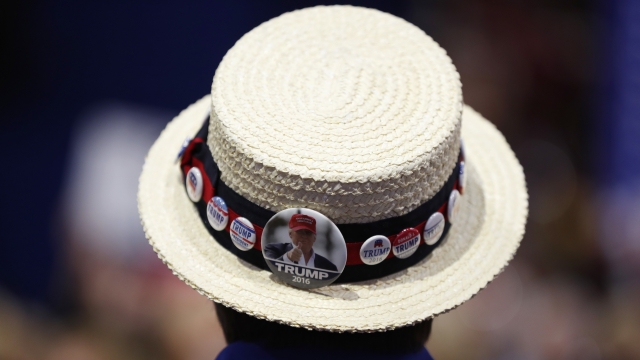 Political conventions are closely choreographed parties that have historically led to short-term increase in the polls in the days following. But the bump has gotten smaller in recent elections. And with both conventions taking place mostly virtually in 2020, there may not be much of a bounce at all.

"The change there is what we referred to as a convention bump," said Thomas Holbrook, a distinguished professor at the University of Wisconsin-Milwaukee. "Some people call it the convention bounce because it kind of tends to disappear over time."

From 1964 up to the 2000s, candidates received about a 6-7 percentage point increase in the polls. But since 2004 the average bounce has been about 2.5 points, according to experts like Thomas Holbrook. The reason why:

"Nowadays with the back-to-back conventions and the conventions tending to be held much later in the season," Holbrook said. "And one of the reasons that's important is that people have had a bit more time to evaluate the candidates already."

Now, the numbers may vary a bit according to different experts, but there is agreement that the post-convention polling bounce just isn't what it used to be. Another major factor at play is how we consume news.

"So if you go back to [the] era of when television was first able to broadcast these conventions, '50s, '60s, '70s, this was an opportunity really for the political parties to shape the voters' views of the party, of their platform [and] of the ticket," said Gerhard Peters, co-director of the American Presidency Project. "But now we're living in this era where we're constantly inundated."

The effect of the coronavirus pandemic on campaigning and the convention is also on display, with both parties to hold events either virtually or scaled down for the first time ever. That means there's less opportunity for protests or interesting news events playing out on the convention floor — something that would normally mean increased news coverage. And both parties may also find it more difficult to keep viewers' attention.

Despite this, each candidate could receive a small — and temporary — bounce in polling this year, although for different reasons. Democrat Joe Biden's historic vice presidential pick Kamala Harris could factor into his bounce, and while President Donald Trump is behind in most polls, Peters says the president could likely have more to gain based on his current standing with voters.

"I know it's hard to make a prediction here [but] who gets the biggest bounce coming out of their convention?"

"I'm going to give it to Trump and the Republicans, actually," Peters said. "And I think I expect to see Biden and Harris to see a bounce. And so because right now the expectations for Trump's re-election prospects are low right now, I would expect the bounce to be realized more by the Republicans than the Democrats."