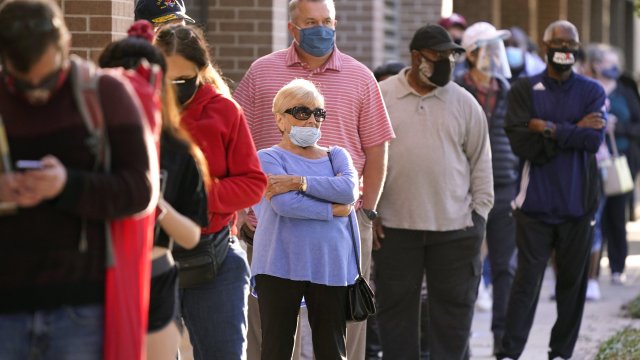 With Nov. 3 still a few days off, Texans have now cast more votes this election cycle than any other year on record. The 9 million early votes cast in the Lone Star State is more than its total 2016 voter turnout.

This historic turnout follows a historic election cycle, where Texas' Republican governor was sued by his own party for extending early voting by six days. Ultimately, the Texas Supreme Court ruled in the governor's favor.

In Texas, voters don't register by party affiliation, so we don't know which party is benefiting from all this early voter enthusiasm. That said, many election experts believe there is a better chance now than there has been in decades of Texas turning blue in the presidential race — pointing to public opinion surveys of early voters and Democratic districts turning out in record numbers.

MARK JONES: "Texas Democrats have a decent chance of not only winning the presidential race here in Texas, but also having considerable success down the ballot. Donald Trump is probably the worst thing that's happened to the Texas Republican Party in the modern era."

Mark Jones of Rice University points to a combination of factors that are contributing to Texas Democrats' newfound optimism about their state, but he also says the common thread is President Trump.

JONES: "And so one thing he's done is he's repelled some people who were regular Republican voters, but he has also given Democrats a great tool around which to mobilize people who, in the past, hadn't always turned out to vote. So really, it's those twin factors that are adversely affecting Texas Republicans."

As Texas wraps up early voting, Democrats have taken notice of this newfound enthusiasm in the Lone Star State. Vice presidential candidate Kamala Harris is visiting Fort Worth, Houston and the U.S.-Mexico border town of McAllen Friday to encourage voters in the state.

Texas has 38 electoral college votes, the second-most in the country, and hasn't given those votes to a Democrat since 1976.