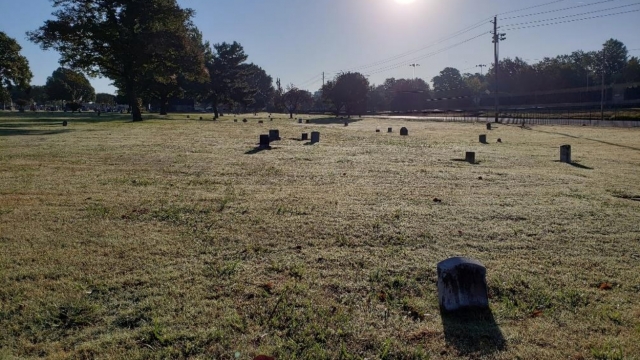 SMS
Experts In Tulsa Might Have Found A Mass Grave From The 1921 Massacre
By Katie Cammarata
By Katie Cammarata
December 18, 2019
In October 2018, Tulsa's mayor opened an investigation to try and find potential graves from the 1921 Tulsa Race Massacre.
SHOW TRANSCRIPT

Nearly a century after it happened, experts in Tulsa think they may have found mass graves that could contain the bodies of victims of the 1921 Tulsa Race Massacre.

"I'm as confident as I can be in the results that this is a very big candidate for something associated with the massacre," Scott Hammerstedt, a senior researcher at the Oklahoma Archaeological Survey, said.

In 2001, a state commissioned report identified a few possible sites of the massacre. And in October 2018, Tulsa's mayor opened an official investigation to try and find potential graves.

A year later, a team of experts used ground-penetrating radar to figure out if there were graves at four sites. After days of extensive searching, those experts say they think they've found a couple of possible common burials, or mass graves. They can't know for sure without further investigation, though.

"This is a murder investigation. Whether you were murdered in 2018 or 1921, the city will do everything we can to find out what happened with you and bring that to justice," Mayor G.T. Bynum said.

Let's put all of this into context. After World War I, racial tensions were high. The Ku Klux Klan was re-emerging and lynchings and other acts of racial violence were common. Tulsa was doing well thanks to oil money, though it did have high crime rates. It was also segregated. Most of the black community lived in a neighborhood called Greenwood. But the area also had something a lot of other cities in the U.S. didn't at the time — a prospering black business district, dubbed the Black Wall Street.

On May 30, 1921, Dick Rowland, a black teenager, got into an elevator with Sarah Page, a white teenager who worked as an elevator operator. We don't know exactly what happened, but at some point during the ride, Page screamed and Rowland ran out of the building. Law enforcement arrested Rowland for sexual assault the next day. A white mob gathered outside the courthouse after Rowland's arrest, and rumors spread of a possible lynching. A group of armed black individuals went to the courthouse in an attempt to protect Rowland. The two groups started fighting each other, and the violence eventually moved to the Greenwood neighborhood. There, more white mobs, including KKK members, shot indiscriminately into homes and businesses, looted, and set fire to multiple buildings. Official reports at the time said 36 people died, and the 35 city blocks were essentially decimated. In September of that year, charges against Rowland were dismissed.

In 1998, a state commission began investigating the massacre, and the search began for unmarked graves of victims. The resulting 2001 commission report concluded, among other things, that the original death toll was way too low. It said between 100 to 300 people were likely killed and thousands of people were displaced. The report also said Rowland most likely tripped and accidentally stepped on Page, causing her to scream.

So what's next? The city and public oversight committee overseeing the grave search will decide official next steps at a meeting in February. But if they decide to excavate the areas experts identified as possible mass graves, they will need several permits.

Hannibal Johnson, an author, attorney and consultant who is familiar with the 1921 Tulsa Race Massacre, told Newsy the attempt to find the bodies of the massacre victims is part of a healing process.

"Just going through the exercise of looking for evidence based on that oral history from decades ago is an important step towards healing. It's really a nod toward fessing up, for being accountable for our history. It's a way for us to move closer toward something we might look at as reconciliation," Johnson said.