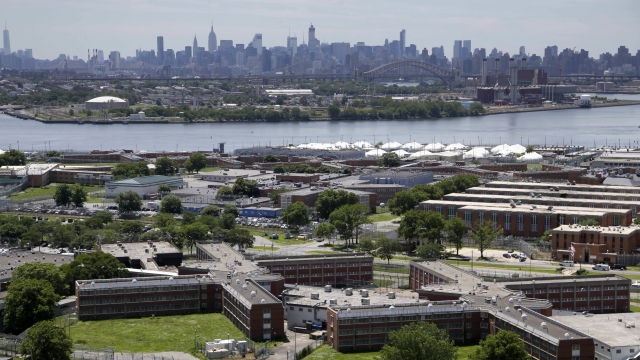 The Associated Press and other media organizations are reporting that former movie producer Harvey Weinstein tested positive for coronavirus in a New York state prison while serving a 23-year sentence for rape and sexual assault.

Weinstein's representatives would not confirm or deny the diagnosis. But the reports highlight the challenges jails and prisons face in balancing concerns over public health and public safety.

Inmates — especially those over 50 — face a higher risk of death from the virus because they tend to have more health conditions than the average American over 50, according to Dr. Robert Cohen.

"The critical issue is who's being kept — who's being housed in the jails and how crowded they are," Cohen said.

If the Weinstein reports are true, it's still not clear when or where he was exposed to the virus. Before Wende Correctional Facility, Weinstein spent time in New York City's Rikers Island Jail complex, where several cases have been confirmed.

"There are there are a lot of people over 50 on Rikers Island who need to get off because they will — it's not so much that the virus will be incubated it's that they will get very sick and those who have serious medical problems are at risk of dying and their sicknesses and health needs will overwhelm the security and medical capacity of the jail," Cohen said.

Rikers is one of many correctional facilities across the U.S. scrambling to contain the spread of COVID-19 by reducing the inmate population. New York state also suspended visitation and the movement of inmates from county to state facilities. As the number of confirmed cases grows in correctional facilities, experts say action is long overdue.

Lawyer Emily Galvin-Almanza of the Justice Collaborative points to the lack of sanitation, the lack of space for social distancing and lack of medical infrastructure to meet the needs of a vulnerable population.

"It's so dramatically important to reduce population numbers in these facilities before we see what we will see which is massive, massive loss of life," Galvin-Almanza said.

Jurisdictions including Cuyahogha County, Ohio, are releasing the elderly inmates and those with health conditions as well inmates deemed low-risk.

"They're not going to put the community at risk. They are making sure violent offenders, sex offenders they're not getting out," Cuyahoga County Executive Armond Budish said.

Some jurisdictions — including Hillsborough County, Florida — are releasing inmates awaiting trial on nonviolent offenses or who were unable to afford bond.

"We have taken an emergency measure to release from custody 164 inmates. These individuals are low public safety risk and were merely sitting in jail because they could not afford the amount it would take to bond out," Hillsborough County Sheriff Chad Chronister said.

In California, officials say they are stepping up screening and safety protocols for inmates still in custody.

"The population is vulnerable. So we are protecting that population. We are doing temperature scannings of everyone so no one infected can be exposed to other inmates," L.A. County Sheriff Alex Villanueva said.

Support for releasing inmates is far from unanimous among law enforcement and local governments. Arizona Gov. Doug Ducey's office said he will not release state prison inmates even as prosecutors and public defenders work to reduce the state’s jail population. Other critics include the Corrections Officers’ Benevolent Association, a union whose members work in 16 jail facilities in New York City, including Rikers.

In a statement, its president called a proposal to release more inmates from Rikers "asinine" and "irresponsible." An inmate who's at high risk for disease may also be a danger to public safety, COBA said. Instead, the union wants officials to focus on bringing more masks and testing into facilities, a spokesman said.

But others, including New York City’s Board of Correction, say more drastic action is still needed.

"What needs to be done is the population has to be substantially and rapidly reduced to allow the medical and security staff to cope with this epidemic," Cohen said.