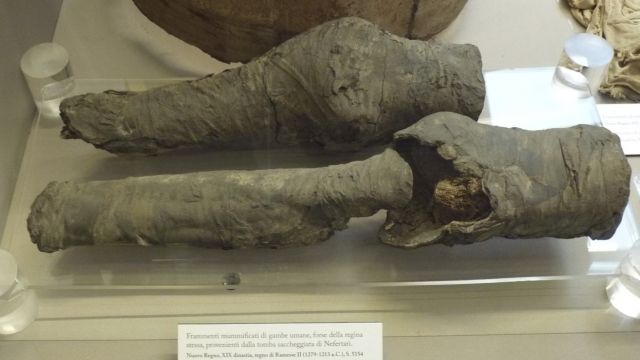 SMS
Experts Have Finally Identified These Ancient Mummified Knees
By Briana Koeneman
By Briana Koeneman
December 5, 2016
For decades, researchers have been trying to figure out who these mummified knees belonged to. And now, they believe they finally know the answer.
SHOW TRANSCRIPT

Who did these knees belong to? That's a question scientists have been trying to figure out for decades.

And according to a new study, they might have finally found the answer.

The mummified leg bones were first discovered in 1904 inside Queen Nefertari's royal tomb in Egypt. Archaeologists had always assumed they were the queen's, and new evidence suggests that might actually be the case.

A team of researchers conducted a thorough study of the bones, including X-rays, radiocarbon dating, chemical analysis and more.

They determined that the legs' owner was a woman who was about 5 feet, 4 inches tall, had mild arthritis and died somewhere between the ages of 40 and 60 years old.

And one of the researchers told The Guardian the careful way the bones were mummified suggests the body belonged to someone very important.

He told the outlet: "She has been reduced to knees. But because we don’t give up — it's like: 'We have got the knees, well, let's do what we can with them.' ... The expertise that had gone into that mummification — even judging from the legs — the care, the attention, the wrapping, the materials employed; they are strongly suggestive someone of incredibly high status."

There's no way to know for sure if the mummified knees did belong to Queen Nefertari. But after all of the tests were completed, the research team determined that the identification is "highly likely."