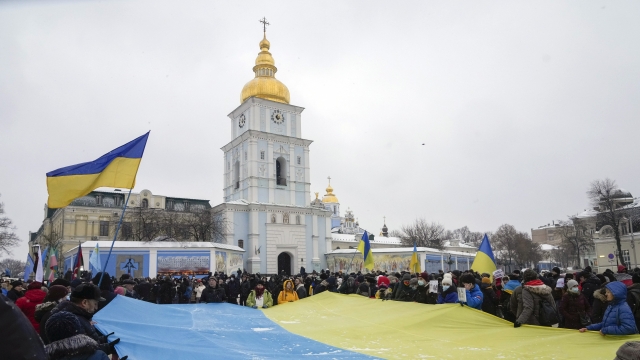 All four cyber military experts Newsy spoke with said Ukraine's military itself would likely be the target of hack attacks.

Experts on cybersecurity are warning that Russia, if it invades Ukraine, would employ cyberwarfare in a way and to an extent never before seen.

Jim Lewis, a former cybersecurity official with the U.S. State Department, says he believes Russians have pre-positioned hacks on Ukrainian networks and before tanks rolled, Russia would pull the cyber trigger.

"They want to create a mess that preoccupies the Ukrainian government, so it's distracted from the fact that they're being invaded, not that they'll ignore it, but that they'll be overloaded," said Lewis, senior vice president and director of the strategic technologies program at The Center for Strategic and International Studies.

That type of attack, Lewis says, might turn out the lights.

"One advantage the Russians have here is they built the Ukrainian critical infrastructure, so they know it inside and out," he continued. "They know it in a way that is just hard to match anywhere else on the planet. So that gives them a tremendous advantage. Plus, they're really good. So if they get into a fight with Ukraine, they will use cyberattacks against the Ukrainian infrastructure and government. "

Ukrainian officials accuse Russia of having already done so. On Jan. 14, a huge hacking attack took down the websites of seven Ukrainian government ministries. However, no critical infrastructure was affected and no personal data was leaked. And Moscow denies involvement with cyberattacks against Ukraine.

Frank Cilluffo, a former Homeland Security official, says Russia showed the world some of its cyber capabilities several years ago in Crimea.

"I think you're going to see a cyber flavor early on. And dare I say, I think you've already seen some of that," he said. "A rubicon was crossed because it was purely through cyber means in 2014, before the run up to the occupation of Crimea. They also took down and jammed cell phones. They were also able to sever internet and disrupt internet communications."

All four cyber military experts Newsy spoke with said Ukraine's military itself would likely be the target of hack attacks.

"If there is an invasion, you'd expect that to be used to try to disrupt, command and control," said Chris Painter, president of the Global Forum on Cyber Expertise. "Russian hackers are among the most sophisticated in the world. Russia has really full spectrum capabilities in cyberspace and are very, very good."

Painter knows this from his time as the U.S. coordinator of cyber issues during the Obama administration. He says the Biden administration isn't just worried about Ukraine's cyber vulnerability.

"Just in the last couple of days, they put out an enhanced warning, saying if there is this kind of military intrusion to that that we should also expect in the U.S., the potential of Russian attacks on us — cyberattacks on us to try to keep us, essentially, out of the game. To be a warning to us — don't intercede. Don't impose sanctions on us," Painter said.