California's Delegates May Be Harder To Win Than Other States' 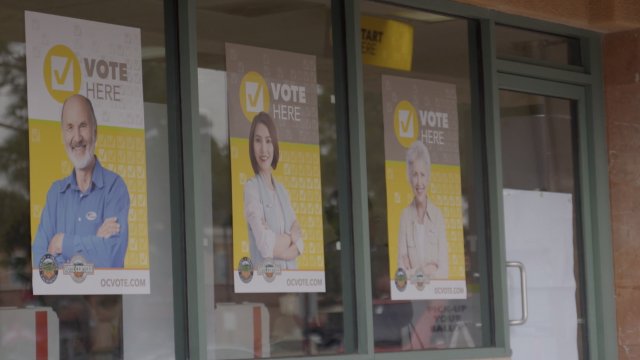 SMS
California's Delegates May Be Harder To Win Than Other States'
By Alexandra Miller
By Alexandra Miller
March 3, 2020
Sen. Bernie Sanders built support in California in 2016, but his opponents have campaigned and spent big in hopes of eating into his lead.
SHOW TRANSCRIPT

For the first time in more than a decade, California matters in the primary cycle.

John Lawrence, a former chief of staff for Rep. Nancy Pelosi, told Newsy: "If you do well in California, you're going to have a significant impact in terms of color in the race and in terms of accelerating your candidacy."

In the 2016 primary, it was the last to cast ballots. But it offers the largest single haul of delegates of any state: 415 of them. To make those delegates matter more, the state moved itself up to one of the most important dates on the primary calendar: Super Tuesday.

"California could be the decisive state to put [Sen. Bernie] Sanders into the nomination, or will be so fragmented that it will be one of the states that guarantee a contested convention," said Christian Grose, a political science professor at the University of Southern California.

Winning here is more complicated than Iowa, New Hampshire or even South Carolina. There are 20 million registered voters in California across five major cities.

David Barker, a political science professor at American University, said: "Candidates can't really make a name for themselves through retail politics there. It's impossible. I mean, there are just way too many people. And there's not enough time. Particularly if you are somebody that the public does not necessarily know very well."

Sen. Bernie Sanders has a double-digit lead in polls over former Vice President Joe Biden. USC Professor Christian Grose says the senator may have positioned himself for a victory here specifically because of his run in 2016.

After a lopsided victory in South Carolina, though, Vice President Joe Biden is looking to cut into Sanders' support in the state. Delegates are awarded proportionally, so if Biden captures 15%, he could prevent Sanders from running away with the primary.

Barker said: "They have to be very strategic. They have to identify particular pockets in the state that are likely to be more or less favorable to them."

Sanders and Biden have a new opponent to worry about on Super Tuesday: former New York City Mayor Michael Bloomberg. He's blanketed the state with more than $50 million in TV and radio ads alone ahead of his first big primary test. But to win any delegates, Bloomberg will need more support than he's getting now. Polls show he's falling a couple points short of the 15% threshold.

Lawrence said: "Well, if you don't have 15%, you don't get any delegates. And that has two effects. One is ... you've spent a whole lot of time and money with nothing to show for it. But it also means that those people who do get better than 15% get a disproportionate share of the delegates because it has to be divided among a smaller number of candidates."

California is deep blue. It has backed a Democrat for president in every election since Bill Clinton in 1992. Still, some moderate Democrats who serve in swing districts are concerned about the impact of a Sanders nomination.

"I think somebody like Bernie Sanders at the top of the ticket for the Democrats could hurt the Democratic House members in Orange County," Grose said.

Biden, Warren and Bloomberg are all hovering around the 15% mark. If they get there, Sanders might not have much of an edge in the total delegate count even if he wins the state.