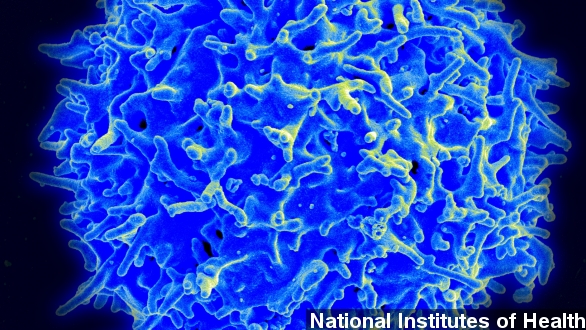 Scientists created a new molecule they believe can prevent HIV from infecting cells by strengthening DNA.

We might be one step closer to stopping the spread of HIV thanks to an experimental vaccine.

Scientists say they have created a new molecule that can prevent HIV from infecting cells. It works by blocking the points where HIV would normally bind to cellular receptors.

The BBC points out this particular vaccination method is unusual; it uses gene therapy to strengthen DNA, while most vaccines protect against disease by training the immune system to fight against them.

But the immune system method does not always work because viruses can mutate, leaving the previously vaccinated body once again vulnerable.

According to Newsweek, researchers say the vaccine should work even if HIV strains mutate because it is based on cellular resistance instead of building up immunities.

Researchers say they believe the molecule could prevent HIV in humans as well as treat people who already have the virus.

"It would allow you to lower the number of drugs you would have to take to control the virus, in the best case, to zero," Dr. Michael Farzan told the The Wall Street Journal.

Researchers say trials need to be performed on humans to fully know how it will affect them.

This video includes an image from the National Institutes of Health.

Madison comes to Newsy from KMIZ. She covered local politics, crime and consumer affairs while working out of Missouri's capital city. Madison graduated from Lindenwood University with degrees in Broadcast Journalism and Mass Communications. While in college, Madison interned and hosted web videos for KTVI in St. Louis. She also served as Miss Spirit of St. Louis in 2011.