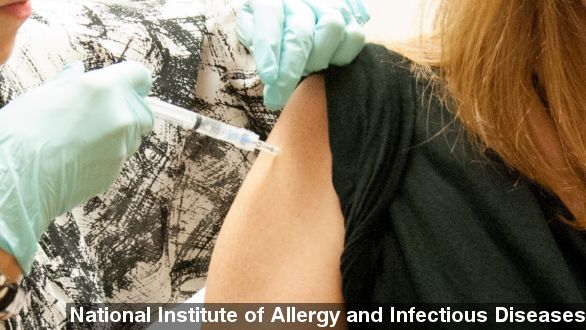 Initial human trials of an experimental ebola vaccine show promise, according to researchers at the National Institutes of Health.

A recent study exposed 20 healthy adults to the prototype drug, which was supposed to trigger an immune system response to Ebola.

According to a report published in the New England Journal of Medicine Wednesday, each patient showed antibody response “in the range reported to be associated with vaccine-induced protective immunity…” In other words, it appears to have worked.

The NIH worked with pharmaceutical company GlaxoSmithKline to accelerate the potential vaccine through to human testing phases.

Researchers based the vaccinations on a flu found in chimpanzees. It contains genetic material from two strains of Ebola, including the one responsible for the current outbreak. (Video via CNN)

The reaction from medical experts and NIH officials is one of cautious optimism.

“We’re hoping to start this much, much larger efficacy trial in, first Liberia, to determine if it actually works,” Said NIH’s Dr. Anthony Fauci.

Even the White House is getting involved. Press secretary Josh Earnest says President Obama will visit the NIH next week to deliver congratulations, get a progress report and to continue pushing congress to approve funding to combat Ebola.

If development yields a usable vaccine, health care workers are expected to get the first doses. The latest numbers from the World Health Organization show 337 workers have died since the start of the outbreak.

Worldwide, the WHO attributes 5,459 deaths to the latest strain of Ebola.