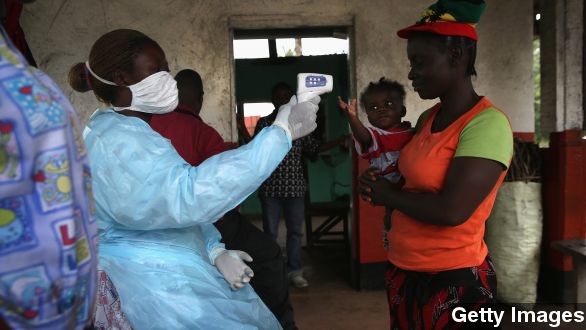 In a new study, a promising experimental treatment for Ebola managed to cure a group of infected macaque monkeys.

The lethal Ebola outbreak is getting worse in West Africa; so far, the virus has caused over 1,550 deaths across five countries. But one of the most promising experimental treatments for combating the epidemic just got a boost.

In a paper published in Nature Friday, researchers testing the experimental drug ZMapp reported it successfully cured a group of monkeys infected with the Ebola virus.

​The scientists injected 18 macaque monkeys in the test group with an Ebola strain similar to the one at the heart of the current outbreak, then treated the monkeys with ZMapp at various stages of infection. The treatment saved all 18 monkeys, even when it was administered as late as five days past infection. By contrast, none of the three Ebola-infected monkeys in the control group survived. (Video via The Age)

Study author Gary Kobinger, who conducted the research with scientists from the San Diego firm behind ZMapp, told reporters the results exceeded expectations, noting the treatment even managed to reverse symptoms of a very advanced Ebola infection.

You might remember ZMapp as the treatment that's credited with saving two American health workers infected with the disease — Dr. Kent Brantly and Nancy Writebol were discharged from the hospital last week after being infected with the virus. (Video via NBC)

ZMapp is now being administered to a British health care worker infected with the virus, under the WHO's "compassionate care" exemption for experimental procedures. (Video via The Guardian)

But for all its successes, ZMapp hasn't been 100 percent effective against this Ebola strain. A Spanish priest and a Liberian doctor both succumbed to the virus despite being treated with ZMapp.

And then there's the production issue. According to the company which makes the drug, current ZMapp supplies are exhausted, and producing a fresh batch will likely take months.

The drug still needs to go through human trials before it can be approved for widespread use. Those tests are expected to begin in early 2015.